SEOUL, Oct. 9 (Yonhap) -- A conservative civic group critical of the Moon Jae-in administration is to hold a large-scale rally in the heart of Seoul on Wednesday to demand the resignation of Moon and his controversial Justice Minister Cho Kuk.

In an apparent countermove, a liberal civic group plans to hold a massive candlelight vigil in southern Seoul Saturday to express their support for Cho, as well as for Moon's drive for prosecutorial reform.

The conservative group, which calls itself the Pan-National Alliance for Moon Jae-in's Resignation, said it will begin its second outdoor rally against Moon and Cho at the Gwanghwamun square at 1 p.m., aiming for attendance of 1 million people.

Wednesday is the annual Hangeul Day, a national holiday to celebrate the invention and proclamation of the Korean alphabet in 1446.

The conservative alliance, launched on Sept. 20 by Jeon Gwang-hoon, a pastor and the chairman of the Christian Council of Korea, and Lee Jae-oh, an adviser of the main opposition Liberty Korea Party (LKP), held its first rally against Moon and Cho at the same venue last Thursday, claiming a crowd of 3 million. 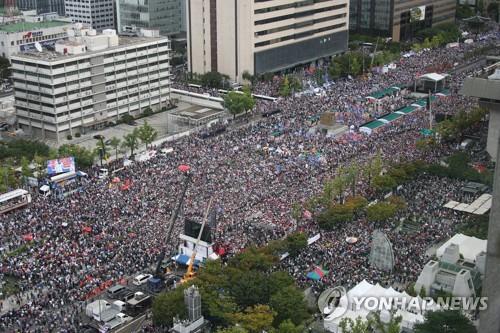 The alliance insists that Cho is not fit to serve as the justice minister overseeing the prosecution, as his family has been under investigations by prosecutors about various corruption allegations.

The conservative demonstrators plan to march towards Cheong Wa Dae, the presidential office, after the Gwanghwamun rally to demand Moon's resignation.

Separately, about 1,000 members of far-right Our Republican Party plan to hold a news conference in front of Sejong Center for the Performing Arts, adjacent to Gwanghwamun, at 4 p.m. to call for Cho's arrest and Moon's resignation. They will march to Cheong Wa Dae after the news conference.

Cho, known as a key architect of Moon's prosecution reform drive, has been under mounting pressure to quit over alleged ethical lapses and a litany of allegations in connection with his family's investment in a private equity fund and his daughter's school admissions.

Moon appointed Cho, a former law professor and former presidential secretary for civil affairs, as justice minister Sept. 9 despite strong objections from the LKP and other critics. The appointment has deepened the divide in South Korea as the LKP calls for his dismissal while the ruling Democratic Party and Cho's supporters call for reform of the prosecutorial system. 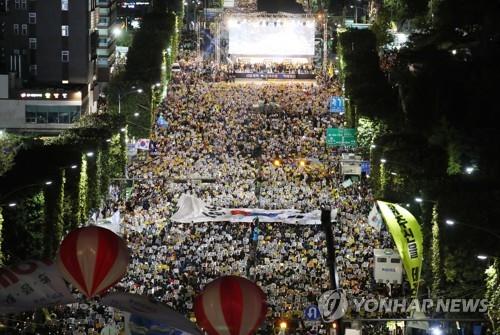 Meanwhile, a liberal civic group called the Civic Coalition for Eliminating Accumulated Ills in the Judicial System plans to hold its fourth candlelight vigil on streets in front of the Seoul Central District Prosecutors' Office in southern Seoul from 6 p.m. Saturday.

The coalition claims that the three previous candlelight vigils held at the same location on Sept. 21 and 28 and Oct. 5 drew millions of supporters of Moon and Cho.