WASHINGTON, Oct. 8 (Yonhap) -- European Union members of the U.N. Security Council on Tuesday condemned North Korea's latest missile launch as a clear violation of U.N. resolutions and urged the regime to engage in "meaningful" denuclearization negotiations with the United States.

Britain, France, Germany, Poland and Belgium, as well as Estonia, which joins the council in January, issued the joint statement after a closed-door session of the Security Council in New York.

North Korean Ambassador to the U.N. Kim Song had warned the U.S. and the three nations that requested the meeting -- Britain, France and Germany -- that discussing the North's "self-defensive measures" will "further urge our desire to defend our sovereignty."

France's Ambassador to the U.N., Nicolas de Riviere, said Tuesday the three countries requested the meeting because of their "deep collective concern" about the North's Oct. 2 test-firing of what it called a new submarine-launched ballistic missile. 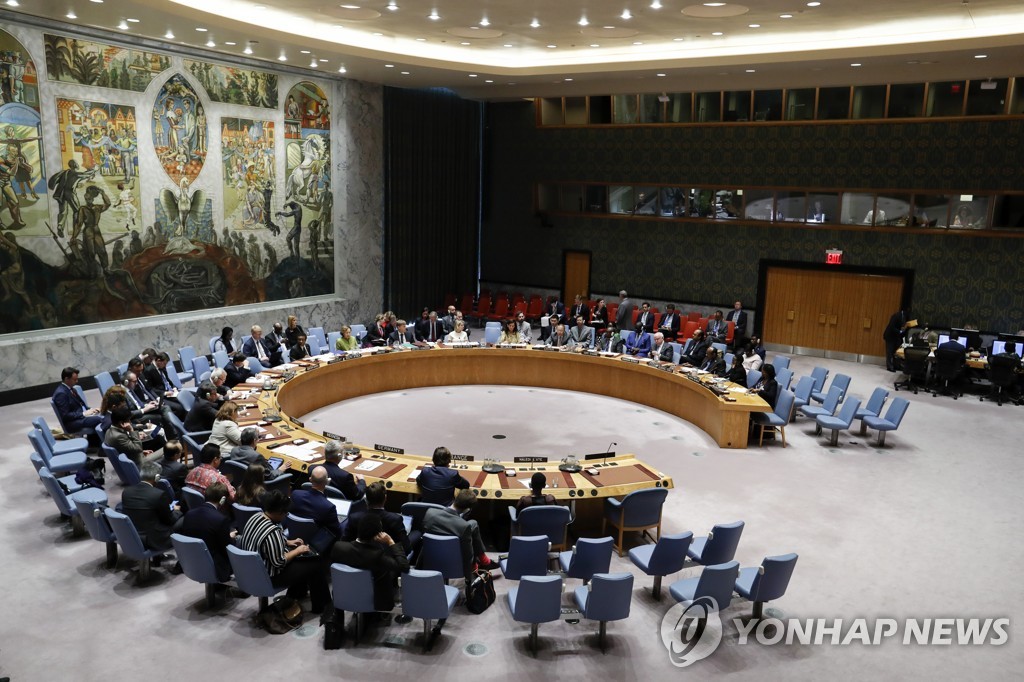 "We reiterate our condemnation of these provocative actions that undermine regional security and stability, and they are in clear violation of U.N. Security Council resolutions," he told reporters as he read out the statement.

Noting that the SLBM test followed a series of short-range ballistic missile launches in previous months, the ambassador called on the Security Council to uphold its resolutions, which ban the North from using ballistic missile technology, and enforce all sanctions on the regime.

"The decision of the Security Council are clear: the DPRK is under the obligation to abandon its programs for the development of weapons of mass destruction and of ballistic missiles in a complete, verifiable and irreversible manner," he said, using the abbreviation for North Korea's official name, the Democratic People's Republic of Korea.

"We urge the DPRK to engage in good faith in meaningful negotiation with the United States and to take concrete steps with a view to abandoning all weapons of mass destruction and ballistic missile programs in a complete, verifiable and irreversible manner," he said, adding there is no other way to achieve security and stability on the Korean Peninsula and in the region.

The SLBM test came Wednesday before North Korean and U.S. officials resumed working-level negotiations on denuclearizing the regime at a meeting in Stockholm, Sweden, Saturday.

North Korea broke off the negotiations, blaming the U.S. for failing to come up with a new proposal.

It also threatened to end a self-imposed moratorium on tests of nuclear weapons and intercontinental ballistic missiles, which has been in place since the resumption of North Korea-U.S. diplomacy in early 2018.

The two sides have wrangled over how much the North should denuclearize before receiving sanctions relief and security guarantees from the U.S.

The difference led to the collapse of February's second summit between U.S. President Donald Trump and North Korean leader Kim Jong-un, followed by the absence of formal negotiations until Saturday.