SEOUL, Oct. 9 (Yonhap) -- The LG Twins will live to see another day of the postseason in the Korea Baseball Organization (KBO).

The Twins rallied to defeat the Kiwoom Heroes 4-2 in Game 3 of their first-round series at Jamsil Stadium on Wednesday, winning their first game in the best-of-five set after dropping the first two contests.

The Twins clawed back from a 2-0 deficit behind a pair of home runs, while starter Casey Kelly and four relievers combined to hold the Heroes to one hit over the final seven innings. 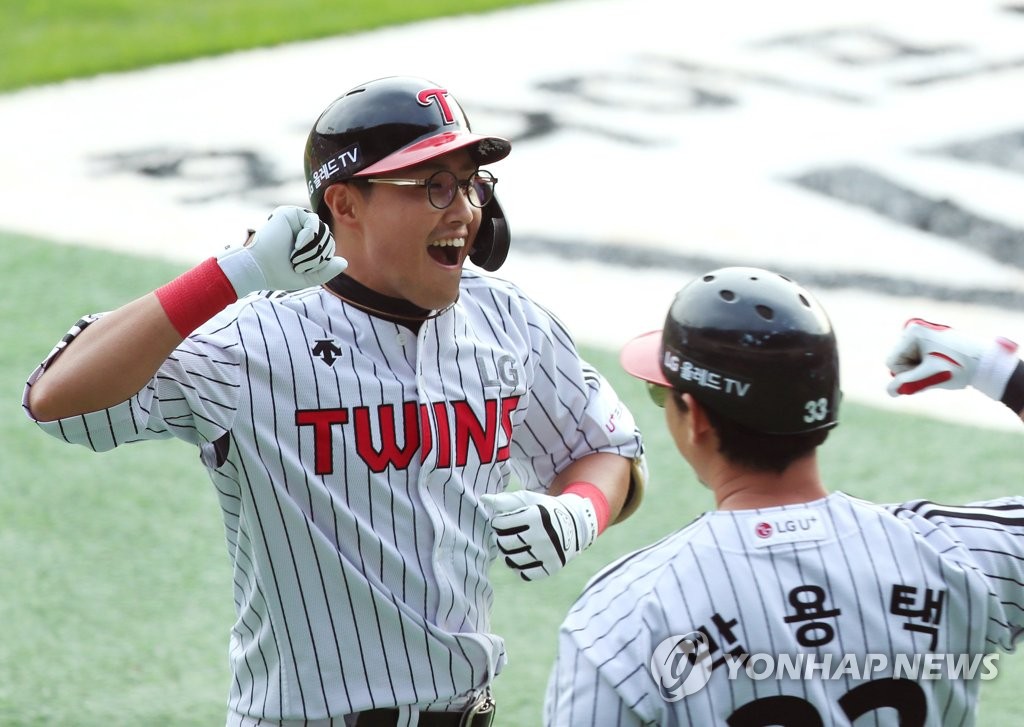 The Heroes took a 1-0 lead in the top of the first, with a single by cleanup hitter Park Byung-ho.

With one out, Lee Jung-hoo hit a single to right and reached second base on LG starter Casey Kelly's wild pitch. Then Park, who belted a home run in each of the first two games of this series, bounced a single to left to score Lee.

The Heroes doubled their lead in the second inning. Following two straight singles from the bottom of the lineup, leadoff man Seo Geon-chang made it 2-0 with a sharp single up the middle.

The Twins got a run back in the bottom second. They drew two walks against Kiwoom starter Lee Seung-ho, and No. 8 hitter Jung Ju-hyeon's single cut the deficit to 2-1.

Chae Eun-seong's solo home run for the Twins in the bottom fourth evened the score at 2-2. Chae swung on a 0-1 fastball, and the towering fly barely cleared the left field wall for his first career postseason home run.

The Twins couldn't cash in after putting a go-ahead run in scoring position in the bottom fifth, when pinch hitter Oh Ji-hwan walked and moved to second on a sacrifice bunt.

But Oh, held out of the starting lineup with lingering knee issues, was thrown out at third base on a grounder to shortstop Kim Ha-seong, who chose to get the lead runner instead of throwing across the diamond to first.

Oh had his moment in the bottom seventh, as he drove in the go-ahead run with a sacrifice fly.

Jung Ju-hyeon led off that inning with a big drive that bounced off the right field wall. Jung was credited with a double but ended up at third base, after right fielder Jerry Sands dropped the ball trying to grab it off the fence with his bare hand.

The error proved costly, as Jung scored on Oh's fly to center field.

Twins' slugger Carlos Peguero, who entered the game in the fifth as a pinch hitter, provided an insurance run with a solo home run in the bottom eighth.

Facing left-hander Oh Ju-won, Peguero crushed a 1-1 forkball for a no-doubter that ended an 0-for-19 funk at the plate dating back to the final week of the regular season. 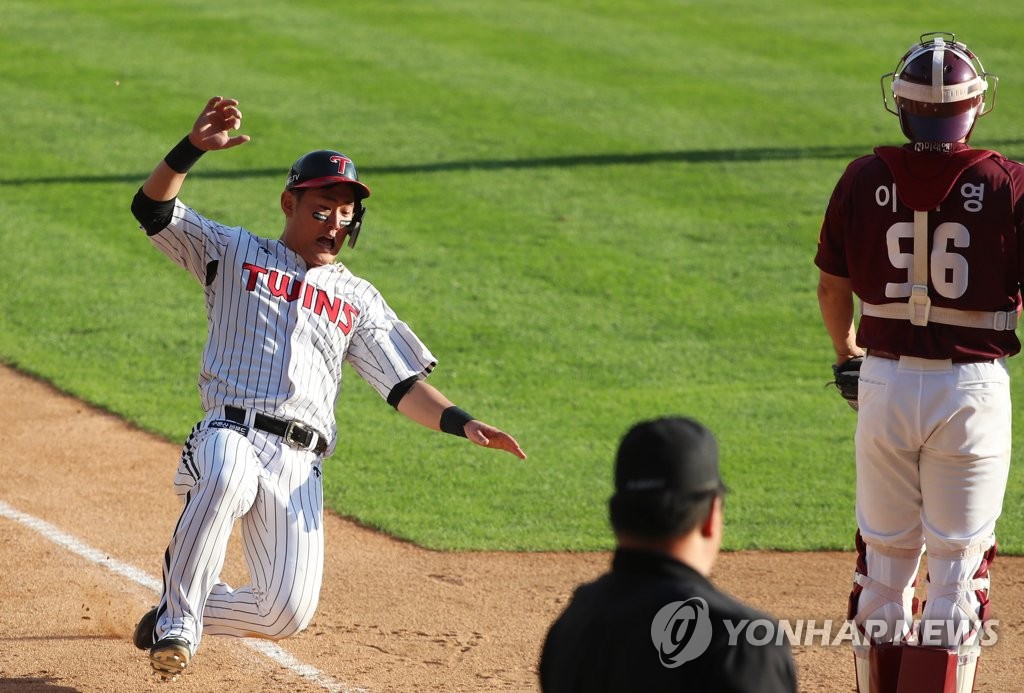 LG closer Go Woo-suk, who'd given up two runs in 2/3 of an inning across two previous games, survived a nervy ninth inning, stranding two runners in scoring position for his first save of the series.

Kim Ha-seong battled Go for a nine-pitch walk to open the ninth. Go then nailed pinch hitter Song Sung-mun in the leg with his first-pitch slider. A sacrifice bunt moved the runners to second and third, putting the Heroes a swing away from tying things up.

Another pinch hitter, Park Dong-won, lined out to center field, not deep enough for Kim to score from third. And Kim Hye-seong flied out to shallow right to send this series to Game 4.

Kelly went six innings and gave up two earned runs on five hits. He struck out five and retired 13 of his final 14 batters.

The Heroes' bats remained cold after Kelly left the game. They wasted Lee Ji-young's leadoff single in the seventh, as the next three batters all hit weak groundballs. 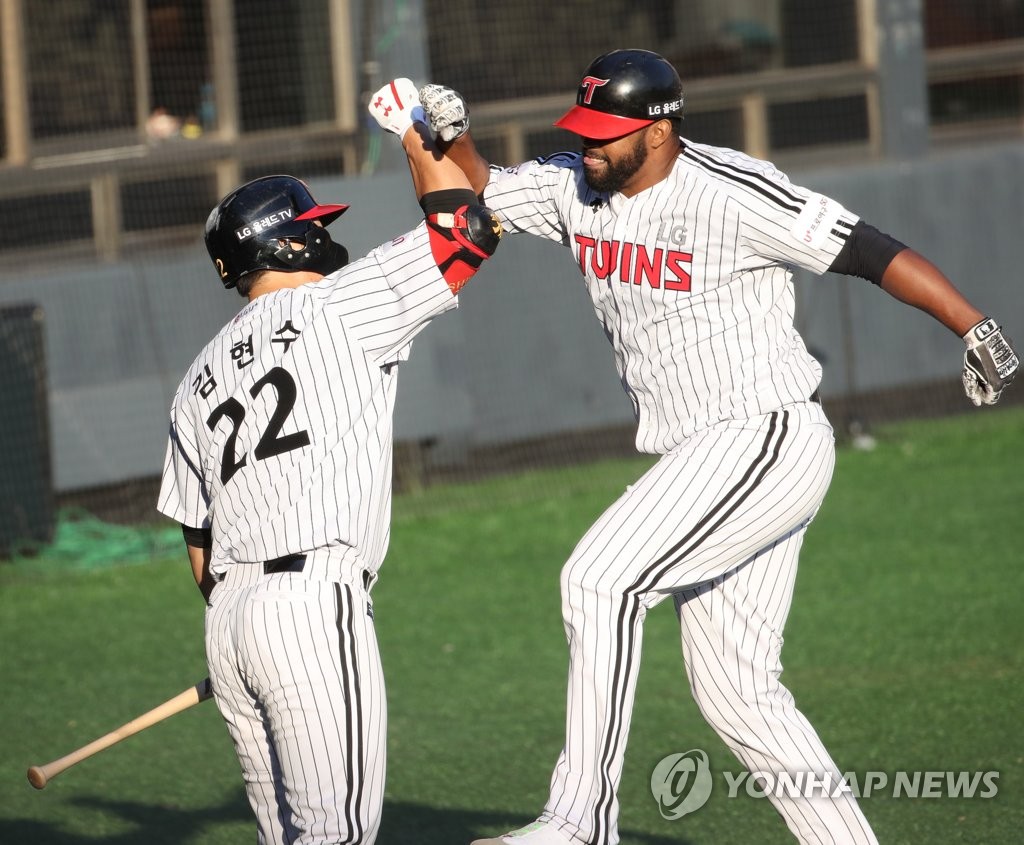