WASHINGTON, Oct. 9 (Yonhap) -- A North Korean vessel that was seized by the United States for suspected sanctions violations has departed American Samoa under tow to be transferred to its purchaser, the U.S. Coast Guard said.

The 17,061-ton Wise Honest, one of the North's largest bulk carriers, was seized by the U.S. in May after it was intercepted by Indonesian authorities for allegedly transferring coal and machinery in violation of United Nations sanctions on the regime.

The ship has since been docked in American Samoa. 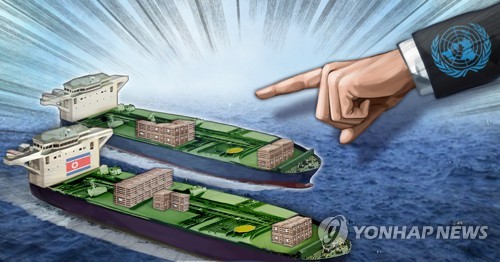 "This action comes after an investigation by the Department of Justice and the sale of the ship in a Southern District of New York Federal Court-directed auction," it said, without elaborating on who bought the vessel and for what price.

The Coast Guard captain of the port recently approved a tow plan from the company that purchased the ship, and the tug arrived in Pago Pago Friday, it added.

North Korea is under multiple layers of U.S. and U.N. sanctions for its nuclear and ballistic missile programs, including a ban on exports of coal.

The Wise Honest is the first North Korean vessel to be seized by the U.S.

The family of Otto Warmbier, an American college student who died in 2017 after falling into a coma during detention in the North, has filed for possession of the vessel, citing the regime's refusal to comply with a U.S. court ruling ordering compensation for Warmbier's death.

North Korea has demanded the U.S. return the ship, denouncing its seizure as an "outright denial" of the spirit of last year's agreement between the two countries' leaders to establish new bilateral relations.

U.S. President Donald Trump and North Korean leader Kim Jong-un have had three meetings since June 2018 in a bid to reach a deal on dismantling the regime's nuclear weapons program in exchange for U.S. economic and political concessions.

The negotiations have stalled since their second summit in February ended without any agreement.

On Saturday, negotiators from the two sides met in Sweden to revive the talks, but the North walked out and blamed the U.S. for failing to come up with a new proposal.