WASHINGTON, Oct. 9 (Yonhap) -- South Korea's chief nuclear negotiator left the United States Wednesday after holding talks with his American and Japanese counterparts on how to make progress in denuclearization negotiations with North Korea.

They agreed not to disclose the details of their discussions, according to Lee, whose visit came days after working-level denuclearization talks between the U.S. and the North broke down in Sweden Saturday. 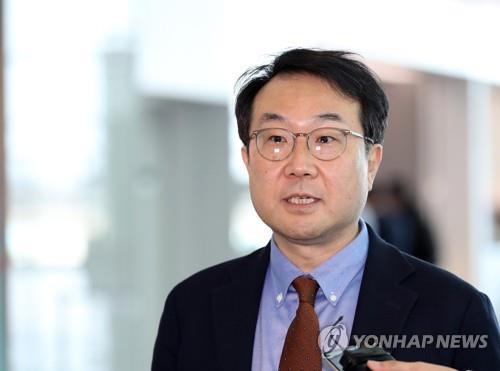 "We don't know what North Korea could latch on to use as an excuse," he told Yonhap News TV before boarding his plane to Seoul at Washington's Dulles International Airport.

"We had in-depth discussions and agreed to continue joint efforts to make progress in the denuclearization issue as we work together," he added.

North Korea's chief envoy to the talks, Kim Myong-gil, told reporters the meeting was a disappointment because the U.S. had failed to come up with a new proposal as demanded by Pyongyang.

The U.S. State Department countered that it brought "creative ideas" to the table and "previewed a number of new initiatives."

The North has insisted on a step-by-step process by which it would receive sanctions relief and security guarantees for each denuclearization measure it takes. But the U.S. has maintained that any concessions will come after the North makes considerable progress on denuclearization.

Lee was singled out by the North on Tuesday for "obsessing over playing the role of a mediator and facilitator" in negotiations between Pyongyang and Washington.

"It is dumbfounding, as what role on earth the South is trying to play at a time when it can't do anything but just pay attention to what the U.S. says," the Choson Sinbo, a pro-North Korea newspaper based in Japan, said.

Earlier, South Korea's foreign ministry said Lee and Biegun discussed recent developments with North Korea, including the U.S.-North Korea working-level talks, as well as their plans for future engagement with the regime.

In trilateral talks with Takizaki, they also discussed three-way cooperation measures to make tangible progress on the North Korea issue, it said in a press release.

The State Department issued a similar statement, saying the three "reaffirmed the importance of continued close U.S.-ROK, U.S.-Japan, and trilateral coordination on North Korea to achieve complete denuclearization and bring lasting peace to the Korean Peninsula."