SEOUL, Oct. 10 (Yonhap) -- South Korea's agricultural ministry on Thursday announced a lockdown on all pig farms in a town north of Seoul, where the country's 14th African swine fever (ASF) case was confirmed a day earlier, and designated nearby areas as a "buffer zone" for intensive quarantine operations.

The 48-hour movement ban on all pig farms in Yeoncheon, north of Seoul, went into effect earlier in the day, according to the Ministry of Agricultural, Food and Rural Affairs.

South Korea confirmed its 14th case of ASF on Wednesday, after a hiatus of five days. It also marked the second case from the town near the border with North Korea.

So far, all confirmed ASF cases came from north of Seoul, adjacent to the border.

As South Korea's quarantine authorities are doubling disinfection efforts to stem the nationwide spread of African swine fever, the ministry also designated a so-called buffer zone near the northern areas with infected farms.

Within the buffer zone, which covers northern areas of Gyeonggi and Gangwon provinces, all automobiles, including those involved in the livestock industry, are banned from visiting pig farms. Passenger cars are given an exception.

Automobiles carrying pig feed from south of Seoul are restricted from entering the buffer zone to directly make deliveries to farms as well, the ministry added.

The ministry plans to implement intensive disinfection operations in the buffer zone, including its streams and roads, to prevent the virus from spreading to the southern parts of the country.

Quarantine officials plan to carry out a closer monitoring on pig farms in the buffer zone as well, considering the incubation period of ASF is estimated at three weeks.

Although ASF is not harmful to people, it is fatal for pigs, with no cure currently available.

South Korea had culled more than 145,000 pigs from the 3-kilometer radius of 13 infected farms as of last week. Following the 14th case, however, the number of pigs slaughtered due to the outbreak will reach nearly 155,000, the ministry added.

The ministry also has been purchasing pigs from two other towns -- Paju and Gimpo -- near the border, along with a limited area in Yeoncheon. The pigs will slaughtered and be released in the market for consumption after going through inspections.

The pigs that are not purchased will be culled as well.

To prevent a potential influx of the virus from North Korea, quarantine officials are carrying out disinfection operations at the Demilitarized Zone (DMZ) with helicopters.

It is still not confirmed, however, how the virus got into South Korea. 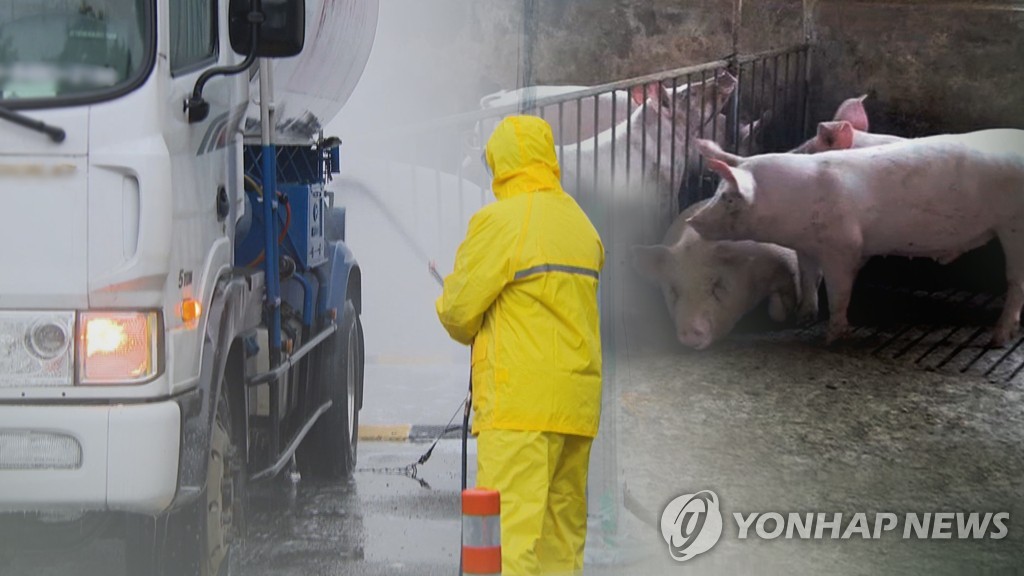