The Korea Railroad Corp.'s (KORAIL) labor union plans to walk out from 9 a.m. Friday through 9 a.m. Monday, according to the Ministry of Land, Infrastructure and Transport.

The 19,000-member KORAIL union decided to strike early last month, after its negotiations with the company broke down in late August. The company did not come up with any improved solutions.

The ministry called on customers who booked a ticket during the period to cancel their plans or change them. Out of some 96,000 tickets reserved for the 72-hour strike period, 62,000 have been canceled but 33,900 have yet to be canceled, the ministry said.

The government plans to deploy substitute workers and alternative forms of transportation to minimize disruption, as the walkout is expected to cut passenger and cargo train operations by 20 percent and 60 percent, respectively.

The union demands the company raise allowances, hire more workers and improve the job status of safety staff and affiliate companies' employees. The two sides had 12 rounds of talks starting in May but failed to reach an agreement.

The government has said it will take emergency measures to reduce transport disruption including deploying non-union railway workers and military staff to run subway and high-speed trains.

The authorities will also utilize express and inter-city buses and get cargo trains to prioritize import and export freight and key industrial goods. 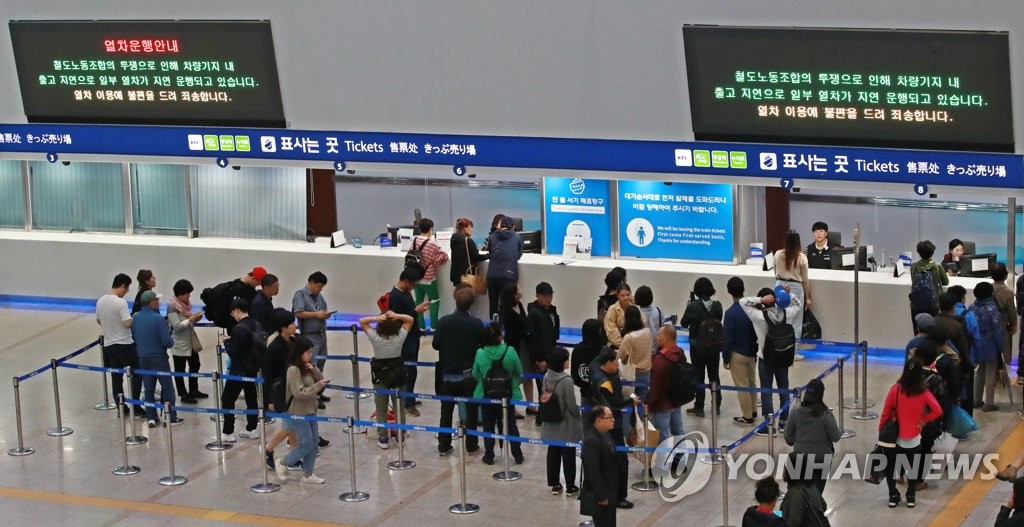 (LEAD) Railway workers to go on three-day strike from Friday

(LEAD) Railway workers to go on three-day strike from Friday