SEOUL, Oct. 10 (Yonhap) -- The Navy said Thursday it has been running a task force on the potential construction of nuclear-powered submarines as part of efforts to bolster its nuclear deterrent and boost defense capabilities.

"With longer-term perspectives to have nuclear-powered submarines, we have been running a task force of our own," the Navy said in a report presented to lawmakers for a parliamentary audit.

"As the matter will be decided in accordance with national policy, the Navy will work closely with the defense ministry and the Joint Chiefs of Staff," it added.

South Korea pushed to build such submarines in 2003 behind the scenes as part of its long-term military buildup program but suspended the project about a year later after it was disclosed in a media report.

"Operating the task force does not mean that the Navy is pushing for related projects in earnest, as nothing has been decided. It is mainly collecting information regarding the matter," a Navy officer said.

Some experts and lawmakers have called for the development of a nuclear-powered submarine, which is regarded as one of the most useful military assets to be operated on the Korean Peninsula to counter threats not only from North Korea but from neighboring countries as well.

Some speculate that the military might push to develop its 3,000-ton Chang Bo Go-III submarine as a nuclear-powered one. Currently, the country is carrying out the project to build the 3,000-ton indigenous submarine by 2031, with a process to develop its system set to begin in earnest this year.

"A nuclear-powered submarine is deemed most effective in detecting and destroying North Korea's subs armed with submarine-launched ballistic missiles (SLBM), as it is capable of carrying out operations underwater for a longer period of time," South Korea's Chief of Naval Operations Adm. Sim Seung-seob said.

"We recognize the usefulness and the necessity of a nuclear-powered submarine because it is a useful deterrent force in responding to North Korea and neighboring countries at the same time," he said.

In recent years, North Korea has been moving to beef up its underwater capabilities by advancing its aging subs and improving its SLBMs. Earlier this month, it test-fired its Pukguksong-3 missile, which is believed to boast a longer flight range than the previous version, the Pukguksong-1 SLBM.

In July, the North also showed off a new submarine that appears to be larger than a 2,500-ton class vessel and capable of carrying three SLBMs.

Currently, North Korea is believed to have 70 subs. But most of them are known to be outdated and unfit for operations beyond coastal waters. 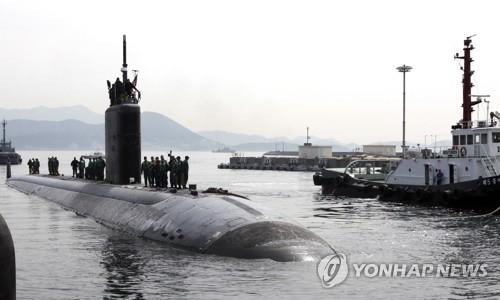