SEOUL, Oct. 10 (Yonhap) -- J-Hope, a dancer and rapper of K-pop superband BTS, has become the first of the band's seven members to land on Billboard's Hot 100 singles chart with a solo song, chart results showed Thursday.

J-Hope's "Chicken Noodle Soup," featuring American diva Becky G, a fashionable revival of American musician DJ Webstar and rapper Young B's street hip-hop song of the same name in 2006, landed at 81st on the Hot 100 for the week of Oct. 12, according to Billboard's website.

The feat was achieved in less than two weeks following the song's official released on Sept. 27.

J-Hope peppered the 2006 song with stylish K-pop vibes and Korean and Spanish rap lines, remaking it into a hip, multicultural hip-hop number.

"J-Hope sees his new solo single 'Chicken Noodle Soup,' featuring Becky G, debut at No. 81 on the Hot 100 dated Oct. 12, as the dancer-rapper-vocalist becomes the first member of BTS to land a solo Hot 100 hit apart from the group," Billboard said ahead of the official release of the chart results.

The song also topped Billboard's World Digital Song Sales chart for the week of Oct. 12, J-Hope's second No. 1 on the same chart following his first with "Daydream" in 2018.

It was also Becky G's first No. 1 on the chart.

The feat rendered J-Hope the sixth Korean pop artist to have landed on the Hot 100 and the third K-pop soloist to have done so, according to Billboard.

The song's witty and hypnotic "chicken wing" dance spawned thousands of videos covering the choreography with the hashtag "#CNSChallenge" on SNS, including one by fellow BTS members, V and Jungkook.

It also marks a rare feat of a trilingual single that blends Korean, Spanish and English in the U.S. music scene, where Asian and Latin cultures are often underrepresented. 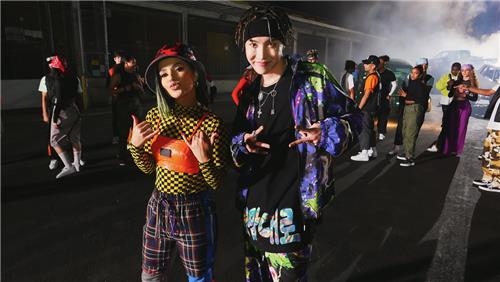