SEOUL, Oct. 10 (Yonhap) -- The Ministry of Culture, Sports and Tourism and the National Police Agency (NPA) signed an agreement on Thursday on bilateral cooperation in cracking down on various online crimes, including distribution of pirated digital content.

Under the agreement signed by Culture Minister Park Yang-woo and NPA Commissioner-General Min Gab-ryong in a ceremony in Seoul, the two government bodies will also intensify clampdowns on scalpers who use so-called macro-programming to buy tickets in bulk for illicit profits. 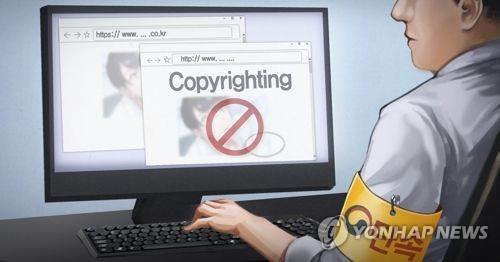 Based on the agreement, the two government institutions will cooperate to revise relevant laws and systems and embark on joint campaigns to root out online crimes, according to officials of the ministry and the NPA.

Notably, the culture ministry will provide its monitoring information on online ticket scalpers to police to help terminate their practice of buying tickets in bulk and reselling them at inflated prices, they explained.

In addition, the two institutions will regularly conduct joint crackdowns on the distribution of pirated digital content and share investigation intelligence and methods until webtoons and other legitimate markets stabilize.

Minister Park said at the signing ceremony that his ministry will cooperate closely with police in cracking down on individuals who use macro programs to disrupt the market distribution order.

NPA chief Min also said cooperation between police and the culture ministry will heighten the possibility of eradicating digital copyright violations and other online crimes.

Culture ministry, police to jointly crack down on online crimes

Culture ministry, police to jointly crack down on online crimes