(ATTN: UPDATES with more comments by finance minister on shorter workweek and background in paras 9-12)
By Kim Kwang-tae

SEJONG, Oct. 11 (Yonhap) -- South Korea will provide support worth more than 2 trillion won (US$1.6 billion) each year to strengthen industrial competitiveness, the finance minister said Friday, amid an ongoing trade row with Japan. 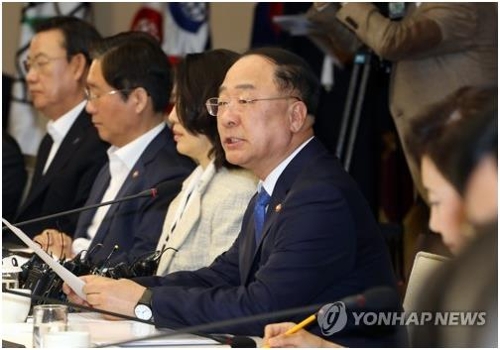 The move is the latest in a series of South Korea's efforts to reduce South Korea's heavy reliance on Japan in the key industrial sector amid Japan's export curbs.

In Geneva, South Korea's chief negotiator, Chung Hae-kwan, is set to meet with his Japanese counterpart later in the day in the first step toward resolving the dispute at the World Trade Organization.

The meeting is the first since South Korea formally filed a complaint with the WTO over Japan's tighter regulations of exporting three industrial materials -- resist, etching gas and fluorinated polyimide -- that are critical for the production of semiconductors and flexible displays.

If South Korea and Japan fail to narrow their differences within 60 days, the WTO Dispute Settlement Body will establish a panel to look further into the case.

The country's efforts to diversify import sources of the key materials are paying off, Hong said, adding that a South Korean company has begun to use Chinese and Taiwanese etching gases for its production process.

Also Friday, Hong said the government plans to announce measures this month to help smaller firms cope with a looming shorter workweek. He declined to provide any further details.

The move came as many young South Koreans seek to strike a balance between work and life, and it is in line with President Moon Jae-in's key election pledges to enhance the quality of life for workers and help create jobs.

Still, critics say that the shorter workweek could undermine corporate competitiveness, including in the research and development sector. Some workers also complain that the reduced working hours led to a reduction in their earnings.
(END)