SEOUL, Oct. 11 (Yonhap) -- Prosecutors said Friday they will widen investigations into a ranking police officer allegedly involved in attempts to cover up irregularities at southern Seoul nightclubs, following his arrest the previous night.

A senior superintendent of the Seoul Metropolitan Police Agency, identified only by his surname, Yoon, was placed under arrest Thursday night after the Seoul Central District Court approved a warrant for his pre-trial detention, citing concern about his destruction of evidence.

The Seoul Central District Prosecutors' Office had earlier requested an arrest warrant for Yoon on charges of accepting bribes, violating the Capital Market Act, obstructing the legitimate exercise of powers and abetting destruction of evidence in connection with its probe into illegalities at Seoul nightclubs.

The 49-year-old Yoon made headlines early this year after he was mentioned in group chat rooms of K-pop stars, including former boy band BIGBANG member Seungri, as someone who helped cover up illicit dealings at the Burning Sun nightclub and other businesses run by Seungri. 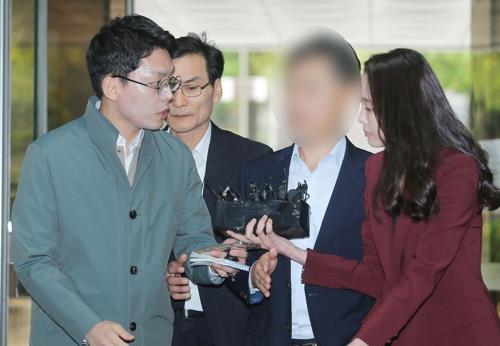 Prosecutors have since widened their probe into an allegation that Seungri and Yoo treated Yoon to illicit meals and golf trips. Yoon and Yoo allegedly played golf four times and dined together six times between 2017 and 2018, while the senior police officer was given free concert tickets three times.

Prosecutors recently arrested a former head of specialty ink maker Nokwon C&I, surnamed Jeong, who reportedly acted as a link between Yoon and Yoo, on charges of embezzlement.

They are also investigating an allegation that Yoon had accepted stocks worth several tens of millions of won from Jeong in 2016 in return for helping cover up corruption charges against the businessman.

Meanwhile, prosecutors said they will look into whether Cheong Wa Dae, the presidential office, and other ranking police officers played a role in the previous police investigation into the Seoul nightclubs, as Yoon had worked at Cheong Wa Dae from 2017 to 2018 under the supervision of Cho Kuk, then senior presidential secretary for civil affairs.

Cho, who was appointed as justice minister last month, has been under mounting pressure to quit over alleged ethical lapses and a litany of allegations in connection with his family's investment in a private equity fund and his daughter's school admissions.

Prosecutors are paying attention to Jeong's relations to the Cho family's private equity fund, due to its investment into Cubes, the predecessor of Nokwon C&I, in 2014. Yoon himself is known to have bought Cubes shares worth several tens of millions of won in the past.