SEJONG, Oct. 11 (Yonhap) -- South Korea said Friday it will strengthen disinfection and other measures to try to contain the further spread of African swine fever.

The move came two days after the country confirmed the 14th case of the deadly animal disease in Yeoncheon, near the border with North Korea.

Quarantine officials slaughtered 9,107 pigs in and around affected farms in Yeoncheon, raising the total number of pigs being culled since September 17, when South Korea reported its first outbreak of the disease, to more than 154,600 pigs.

Agriculture Minister Kim Hyeon-soo instructed officials to step up disinfection efforts in areas near Yeoncheon to prevent the spread of African swine fever.

In May, North Korea reported its first outbreak of the disease at a farm near its border with China to the World Organization for Animal Health. 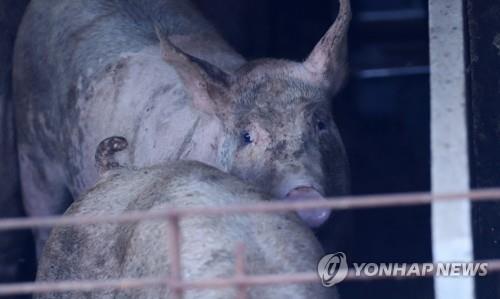 S. Korea to beef up measures to prevent spread of African swine fever

S. Korea to beef up measures to prevent spread of African swine fever