GENEVA/SEOUL, Oct. 12 (Yonhap) -- South Korea and Japan on Friday ended their first round of talks on a bilateral trade dispute with an agreement to meet again for further consultations.

The two sides met in Geneva to discuss South Korea's complaint with the World Trade Organization over Japan's export controls against the South.

"We agreed that further consultations are necessary, and decided to schedule a second round of bilateral talks through diplomatic channels," Chung Hae-kwan, the chief South Korean delegate to the talks, told reporters. 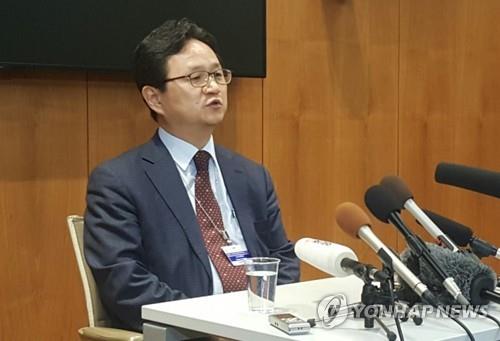 Seoul's complaint accuses Tokyo of violating a set of international trade rules, including Article 11 of the General Agreement on Tariffs and Trade (GATT), which bans regulations on export volumes unless the products have a serious impact on national security.

The move came after Japan implemented regulations in July on the export to South Korea of three industrial materials -- fluorine polyimide, photoresist and hydrogen fluoride -- vital for the production of chips and displays.

Seoul views the measure as retaliation for a South Korean court ruling that ordered compensation for Korean victims of Japan's forced labor during its 1910-45 colonial rule of the Korean Peninsula.

Japan has claimed the regulations were necessary because South Korea operates a lax control system on the trade of sensitive goods.

South Korea's trade ministry claims that allegations raised by Japan were groundless and they cannot justify a discriminative trade policy that targets only Asia's No. 4 economy.

If the two fail to narrow their differences within 60 days of the complaint, which was filed Sept. 11, they can request that the WTO Dispute Settlement Body establish a panel to look further into the case, Chung said.

"Bilateral consultations usually end in one round, but the fact that we agreed to meet again means that both countries are ready for dialogue and willing to work together," he added.

The Japanese delegation also held a press briefing earlier, claiming it was "inappropriate" for South Korea to bring the dispute to the WTO for "political" reasons.

"Japan is concerned about the vulnerability of South Korea's export management system," Junichiro Kuroda, Tokyo's chief delegate to the talks, said. "We are allowing (the export of the affected items) once their civilian use is verified, so it is not an embargo."

He also claimed that the regulations had nothing to do with the South Korean court ruling on forced labor.

The trade dispute has escalated and spilled into other spheres of bilateral relations, with South Korea deciding in August to terminate a military intelligence-sharing pact with Japan.