SEOUL, Oct. 14 (Yonhap) -- President Moon Jae-in's approval rating dropped again to its lowest level, a weekly survey showed Monday, amid a lingering public outcry over Justice Minister Cho Kuk, whose family is under a criminal investigation in a fraud and corruption scandal.

It marked the lowest in its weekly survey of public support for Moon since the president took office in May 2017.

The proportion of people critical of Moon rose 3.8 percentage points to 56.1 percent from a week earlier.

Realmeter pointed out that controversies over the justice minister remained a key political issue, as media continued to churn out relevant reports. 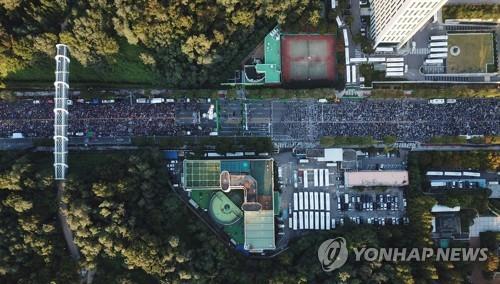 The ruling Democratic Party's approval rating dipped 3 percentage points to 35.3 percent, the lowest in seven months, while that of the main opposition Liberty Korea Party (LKP) kept rising to 34.4 percent, the highest in five months. The LKP's rating stood at 33.2 percent in the first week of October.

It's the narrowest gap between the approval ratings of the rival parties in Realmeter's weekly poll since the launch of the Moon administration.

A separate Realmeter survey showed that a majority of South Koreans want the justice minister to step down.

In a poll of 500 adults across the country last Friday, commissioned by the CBS broadcaster based in Seoul, 55.9 percent called for his resignation and 40.5 percent said Cho should stay in office. The margin of error is plus or minus 4.4 percentage points.