SEOUL, Oct. 14 (Yonhap) -- South Korea's Air Force chief was to meet with his counterparts from 10 countries, including the United States, in Seoul this week on the sidelines of a large-scale aerospace and defense expo, his office said Monday.

Air Force Chief of Staff Gen. Won In-choul will hold one-on-one meetings with U.S. Pacific Air Forces commander Gen. Charles Q. Brown and nine other air force chiefs from such countries as Malaysia, Brazil and Peru between Monday and Wednesday, according to his office.

The military chiefs will visit South Korea to attend the Seoul International Aerospace & Defense Exhibition (ADEX) set to run from Oct. 15-20 at Seoul Airport in Seongnam, south of Seoul. The biennial event will bring together around 430 defense companies from 34 countries for its largest-ever event, according to the defense ministry.

"The meetings will serve as a venue to discuss ways to boost military exchanges and cooperation bilaterally," the Air Force said, adding that Won will also promote South Korea's advanced aircraft and flight training systems to his counterparts.

During the meeting with the U.S. pacific air force commander on Wednesday, Won will share views on the latest situation on the Korean Peninsula and other major issues of mutual concern, such as South Korea-U.S. combined exercises and ways to beef up their security cooperation in the space and cyber fields, according to the Air Force.

China plans to send a two-star air force officer to this week's meeting, while no Japanese officials will attend, an Air Force officer said.

Meanwhile, the Air Force hosted an international aerospace forum on Monday in Seoul, which brought together some 600 military officers and experts from at home and abroad.

During the one-day symposium, the participants discussed how to manage aerospace power in accordance with changing security circumstances and ways to strengthen such capabilities in line with the Fourth Industrial Revolution.

"Now is high time to develop novel operational concepts and systems ... based upon state-of-the-art technologies to effectively cope with fresh security threats from drones," Defense Minister Jeong Kyeong-doo said in a congratulatory speech. 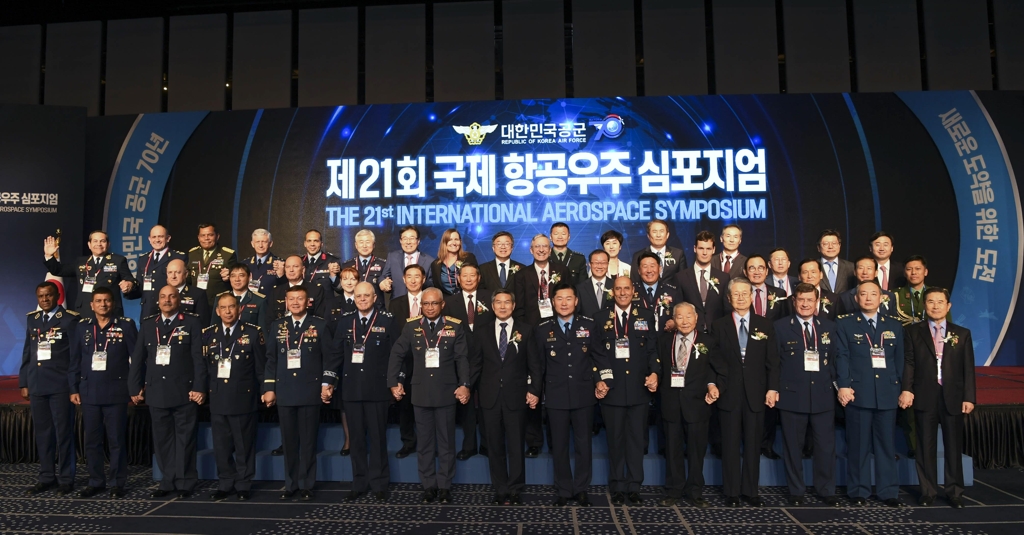