SEOUL, Oct. 14 (Yonhap) -- A North Korean propaganda outlet on Monday slammed a recent trilateral meeting between the chairmen of the Joint Chiefs of Staff (JCS) of South Korea, the United States and Japan, claiming that their talks were aimed at heightening tensions on the Korean Peninsula.

South Korea's JCS Chairman Gen. Park Han-ki and his U.S. and Japanese counterparts, Gen. Mark Milley and Gen. Koji Yamazaki, met in Washington earlier this month, as Park and Yamazaki were in the U.S. capital to attend the change of command ceremony for new chairman Milley.

DPRK Today, one of the North's propaganda websites, claimed that the U.S. organized the meeting to revive a military intel-sharing pact between South Korea and Japan to tighten the "invasive trilateral military alliance" among the three countries.

South Korea decided to terminate the pact, known as the General Security of Military Information Agreement (GSOMIA), in August in response to Japan's economic retaliatory measures in a row over wartime forced labor.

The article also lashed out at South Korea for "secretly plotting" with the U.S. and Japan to confront the North, calling the move a "provocative act" that cannot be rationalized.

"(The meeting) revealed the ugly identity of the South Korean authorities which go mad for the North-South confrontation and an invasion against the North," it said.

Details of the trilateral meeting were not made public, but a key topic of the discussion is likely to have been South Korea's decision to withdraw from GSOMIA.

North Korea has long called for an end to the deal, criticizing it as a stepping stone for Japan to reinvade the Korean peninsula. 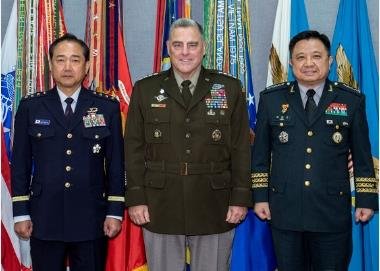