SEJONG, Oct. 14 (Yonhap) -- South Korea's quarantine authorities on Monday vowed to prevent the potential spread of African swine fever (ASF) via wild boars, as some of them were discovered dead with traces of the virus north of Seoul over the weekend.

A total of five wild boars have been found dead north of Seoul this month amid rising speculation that the virus may have traveled from North Korea, which reported its own outbreak a few months earlier.

South Korea has reported 14 confirmed cases of ASF at local pig farms since mid-September, when the country experienced its first-ever outbreak of the highly contagious disease. So far, all of the outbreaks came from areas bordering North Korea.

No new cases have been reported since Thursday.

The disease is spread through direct contact with animals carrying the virus or by contaminated feed.

On Sunday, the agricultural ministry designated two towns from the north of Seoul as areas vulnerable to infection through wild boars. In such zones, quarantine authorities will make all-out efforts to hunt down wild boars by utilizing traps and guns.

"Some farms do not have sufficient facilities, such as fences to prevent their contact with wild boars," Agricultural Minister Kim Hyeon-soo said during a meeting held at the Sejong Government Complex in central South Korea. "This need to be improved as soon as possible."

Quarantine authorities also plan to carry out disinfection operations in the border areas, including the Demilitarized Zone, with helicopters.

The ministry vowed to speed up the purchase of pigs from farms in the affected areas as well, which will be slaughtered and inspected before their meat is released to the market. Pigs that are not purchased will also eventually be culled.

The ministry has been culling all pigs within a 3-kilometer radius of infected farms. More than 150,000 pigs have been culled since the outbreak started. 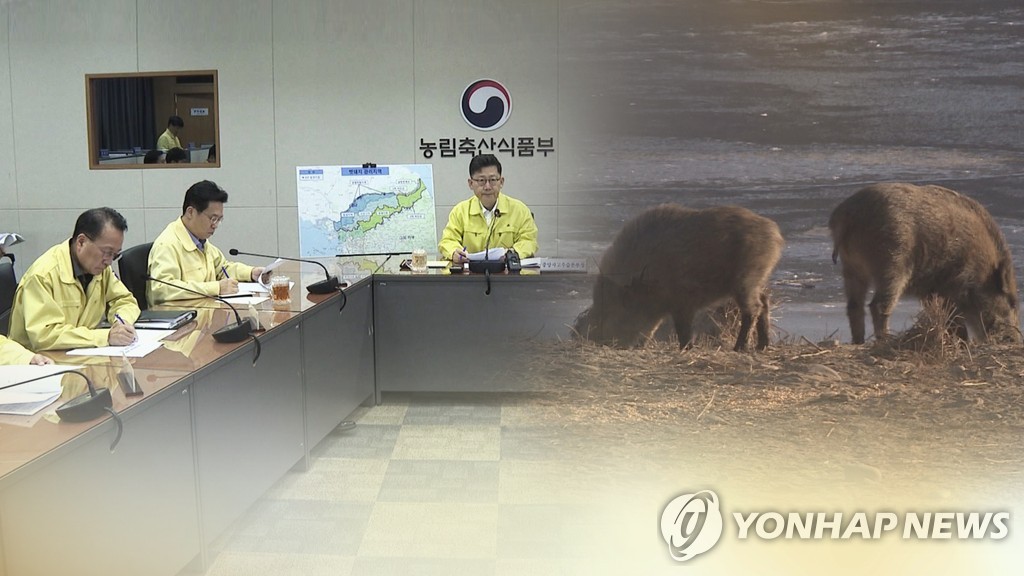 With no additional ASF case for 5th day, S. Korea in battle to stem possible spread via wild boars

With no additional ASF case for 5th day, S. Korea in battle to stem possible spread via wild boars