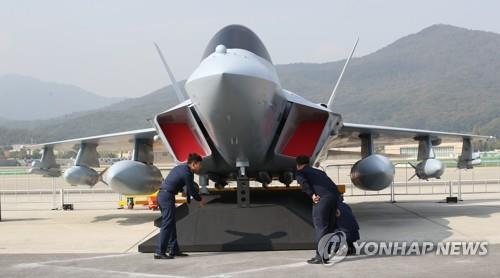 South Korea will exhibit its F-35A stealth fighter jets, which is a centerpiece of the country's strategic targeting scheme, as well as F-15K and KF-16 fighters. It also plans to have the first flying display of its light armed helicopter (LAH), according to the ministry.

Drawing particular attention is a mock-up of South Korea's envisioned indigenous cutting-edge fighter aircraft, which is to be unveiled for the first time.

The 8.8-trillion won (US$7.3 billion) KF-X project began in January 2016 to develop the home-grown fighter to replace the Air Force's aging fleet of F-4 and F-5 jets.

As its design was completed last month, Korea Aerospace Industries (KAI) has been working on a prototype to be rolled out in 2021. The government aims to complete the project by 2026.

According to KAI, the 16.9-meter-long fighter can fly at a maximum speed of Mach 1.81 with its flying range reaching 2,900 kilometers.

With a maximum payload of 7,700 kilograms, the KF-X fighter is capable of installing 10 pods for missiles and fuel barrels. It will be able to carry several types of air-to-air missiles, such as Germany's IRIS-T and European developer MBDA's active radar guided Meteor missiles, KAI said.

"The KF-X fighter is categorized as a 4.5-generation jet, though it bears outward similarities to the fifth-generation F-35A," a KAI official said.

"Its operation cost is half that of F-35A aircraft while boasting superior maneuvering capability," he added.

But the U.S. military decided not to send strategic stealth jets, such as F-22 and F-35A fighters, this time, officials said, though such next-generation weapons were sent to the previous ADEX event. The move appears to be in consideration of the changing security circumstances on the Korean Peninsula, as efforts to denuclearize North Korea have been underway.

"We have a partnership unlike any other, and showcasing America's airpower at this year's Seoul ADEX is a tribute to our continued pledge to promote peace, stability and prosperity on the Korean peninsula," Lt. Gen. Ken Wilsbach, 7th Air Force commander, said.

During the event, visitors can also watch acrobatic displays by the Air Force's Black Eagles flight team and several civilian teams from abroad. 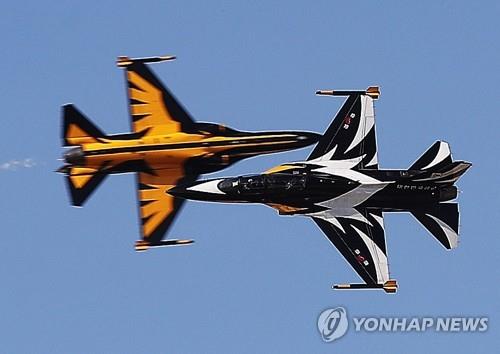