SEOUL, Oct. 14 (Yonhap) -- The Bank of Korea (BOK) is widely expected to slash its policy rate this week amid increased headwinds, though it may expect little or no effect without increased fiscal spending to help spur growth, analysts said Monday.

The central bank will hold its rate-setting meeting Wednesday, about two months after it cut the rate by a quarter percentage point to 1.5 percent in July. In August, the seven-member board kept the policy rate frozen in a split vote.

Another rate cut by 25 basis points will send the key rate to a record low of 1.25 percent, only seen once after the last rate cut prior to the July cut in June 2016.

A need to support the local economy has repeatedly been stressed since Asia's fourth-largest economy unexpectedly contracted 0.4 percent from three months earlier in the first quarter, followed by a 1.1 percent on-quarter expansion in the second quarter.

But economic conditions facing the economy have gone from bad to worse, putting pressure on the BOK to trim the rate again, although any additional rate reduction may lead to a rise in household debts and housing prices. In July, the central bank cut its growth outlook for the year to 2.2 percent from 2.6 percent amid increased downside risks.

"As the country's economic growth may further slow next year, the central bank will have no choice but to take a (preemptive) step by slashing the base rate," said Cho Young-moo, a researcher at LG Economic Research Institute.

In a recent survey conducted by Yonhap Infomax, the financial news arm of Yonhap News Agency, 19 out of 21 experts polled expected a rate cut this week. 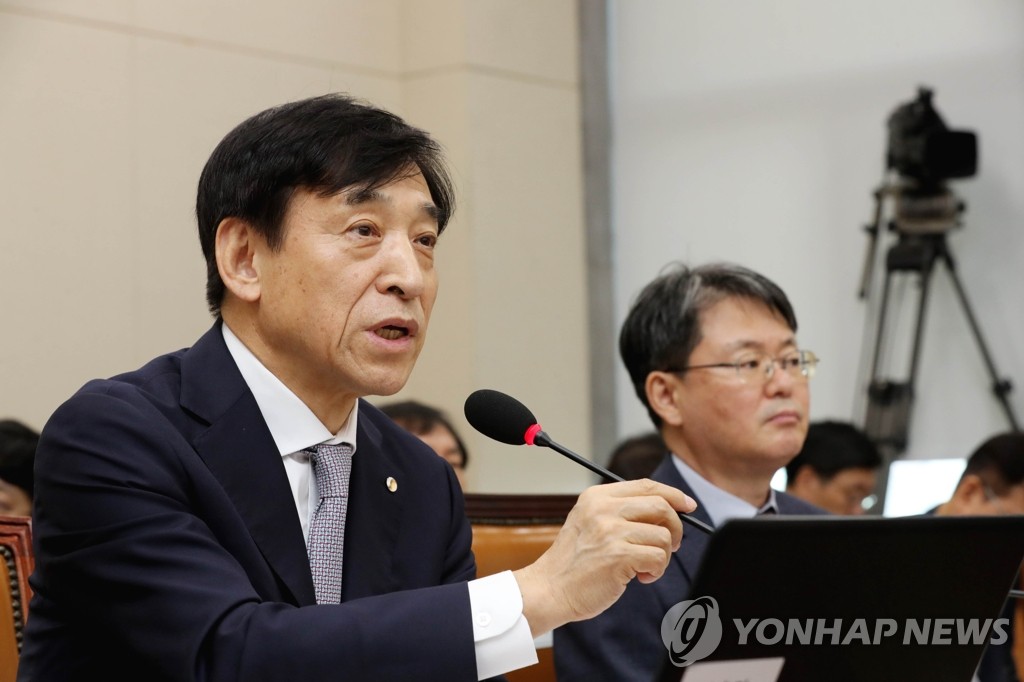 "We will have to see, but I will say it is not easy to meet the 2.2 percent growth target," Lee said while meeting with reporters last month.

He also said last week that the BOK is "sending a signal to the financial market that it will realign its monetary policy to support economic recovery."

"I believe he hinted at a rate cut by publicly admitting it may be difficult to meet the 2.2 percent growth target this year while stressing increased uncertainties in the path to growth," said Daishin Securities analyst Kong Dong-rak.

Recent economic data show that the economy is set to further lose growth momentum in the face of a lengthy trade row between the United States and China, the country's top two trading partners.

South Korea's exports have dipped for 10 consecutive months since December, while the rise in its consumer prices has remained well below the 2 percent target for years.

The central bank has already twice revised down its 2019 growth outlook from 2.6 percent to 2.5 percent in April, then to 2.2 percent in July.

The BOK, however, apparently sees little boost coming from potential rate cuts because the ongoing slump is largely caused by external factors.

"It appears the local economy will continue to face increased uncertainties in the future due to the slowing growth of the global economy and a delayed recovery of the semiconductor market," the BOK chief has said.

In fact, the country's exports not only continued to shrink but accelerated their rate of fall even after the BOK slashed the base rate in July, plunging 13.6 percent on-year in August and 11.7 percent in September, compared with a 11 percent drop in July.

Observers insist the key to growth, at least under current conditions, may be to increase fiscal spending.

"Even if (the BOK) reduces the key rate, how effective it will be remains questionable as the rate of money circulation remains slow with little room left for monetary policies," said Joo Won, a researcher at the Hyundai Economic Research Institute.

The BOK too says a rate cut must be supported by an increase in government spending.

"The slowdown in the growth of the global economy may be inevitable due to shrinking trade and investment. ... Under such conditions, monetary and fiscal policies will have to remain in an expansionary mode to minimize the negative impact from external shocks," a BOK monetary policy board member said in the latest board meeting held Aug. 30.

In a study released Sept. 16, the central bank claimed fiscal spending generates a greater effect over time, meaning government budget spent now may continue to affect growth down the road.

So far, the government has secured an extra budget of 5.83 trillion won (US$4.9 billion) this year, accounting for a little over 1.2 percent of its annual budget of 469.6 trillion won.

For 2020, however, the government has proposed a record high 513.5 trillion-won budget, which, if approved by the parliament, would mark a 9.3 percent spike from the 2019 budget.