SEOUL, Oct. 14 (Yonhap) -- South Korea's most-anticipated World Cup qualifier of the current campaign, set to kick off in Pyongyang, will not be broadcast live to a South Korean audience, broadcasters here said Monday.

On Tuesday, North Korea will host the South-North match for the second round of the Asian qualification for the 2022 FIFA World Cup at 5:30 p.m. at Kim Il-sung Stadium in the North Korean capital.

The South's national team arrived at an airport in Pyongyang after a stopover in Beijing and is now making final preparations, including a nighttime training session, according to the Korea Football Association. 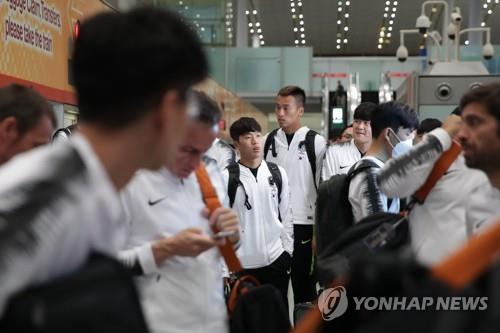 It is a rare sports exchange between the two sides at a time of heightened tensions on the divided peninsula following a series of North Korean provocations.

The North, however, has remained silent on South Korea's offer to discuss the issue of sending a cheering squad.

The government will operate situation rooms at a hotel in Pyongyang and the government complex in Seoul to communicate and deliver information about the match to the South Korean audience, a unification ministry official said.

It is yet unclear through what means the information will be delivered.

"We are still thinking of what would be the best way to deliver the news," the official said. "We will review available means to deliver as much information as quickly as possible."

The websites for FIFA, the international football governing body, and the Asian Football Confederation (AFC) also provide online commentary, but they only provide information on goal scorers and substitutions.

The North's previous World Cup qualifier against Lebanon, held in Pyongyang on Sept. 5, was broadcast on North Korean TV a day later.