North Korea is set to host the game on Tuesday in Pyongyang as the two Koreas were placed in the same group for the second round of the 2022 FIFA World Cup qualification. This will be the first such match since 1990, when the two Koreas held a friendly game in the North Korean capital.

On Sunday, a total of 55 people, including 25 South Korean players, left for Beijing en route to the North and were expected to fly to Pyongyang on Monday, after Seoul had unsuccessfully sought to use a direct air or land route to send the players and officials.

Pyongyang has stonewalled on Seoul's repeated calls for discussions of issues like using a direct travel route, sending South Korean spectators and journalists. Negotiations with the North on whether to broadcast the match live to a South Korean audience have collapsed, according to Seoul officials.

Though there could be a last-minute breakthrough, chances are high that Tuesday's match will take place with neither a live broadcast nor fans and journalists from the South, unusual circumstances for such an international match.

The North's uncooperative stance on the match is seen as the latest reminder of how stalemated inter-Korean relations remain and the extent of Pyongyang's displeasure with South Korea over what it claims to be a lack of initiative in pushing for cross-border exchange while minding too much what Washington says.

"I think North Korea is signaling a sense of disappointment with South Korea by staying mum on those issues. The disappointment appears to be turning into anger as shown in its media's recent criticism directed at South Korea," Hong Min, a research fellow at the Korea Institute for National Unification, said.

North Korea has slammed South Korea for undermining inter-Korean relations, saying that it pays too much attention to what the U.S. says and uses sanctions on Pyongyang as an excuse in dragging its feet in expanding cross-border contact and exchange.

The North has also lashed out at Seoul for conducting joint military drills with Washington, saying that it is a violation of summit agreements their leaders reached last year.

It is in stark contrast with the rapprochement created in the wake of three summits that South Korean President Moon Jae-in and North Korean leader Kim Jong-un held last year. The leaders agreed to bolster cooperation in various areas and take action to reduce military tensions across their border.

As part of the agreements, a joint liaison office in the North's border town of Kaesong opened last September to support more active cross-border exchanges. The two Koreas also held a groundbreaking ceremony in Kaesong for a project to modernize and connect severed railways and roads over their border as agreed by their leaders.

Inter-Korean exchange, however, has almost ground to a halt this year, with major projects making little progress, especially since the breakdown of the February summit between North Korean leader Kim and U.S. President Donald Trump.

Global sanctions are seen as a major roadblock for active economic cooperation between the two Koreas. Mindful of sanctions violations, Seoul has recently focused on cooperative projects with Pyongyang in social, cultural and other non-economic areas.

Despite such efforts, Pyongyang has not been cooperative. Seoul's offers to provide the Tamiflu antiviral drug in December and send food assistance via a global aid group to its starving people in June have been rejected.

When the North announced last month that it will host the inter-Korean World Cup qualifier, hopes arose that the match could lead to exchanges at civilian level, which could, in turn, help provide a much-needed impetus for the two Koreas to move their stalled relations forward again. 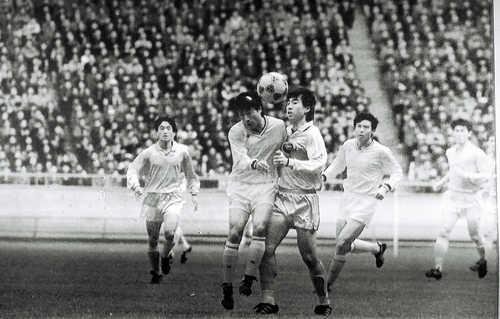 It is nothing new for North Korea to not allow outside spectators to visit the country or broadcast such global sports events live, as shown in the case of last month's World Cup qualifier held in Pyongyang between the North and Lebanon. The match was aired on the North's state TV a day later.

"We are not Lebanon," a government official said on condition of anonymity, emphasizing that it is a match between the two Koreas. "There were cautious expectations that the upcoming match could provide an impetus in inter-Korean relations. We are disappointed with the North not responding to our offers for talks on the upcoming event."

Experts said that things are not likely to change for the better, at least in the near future, as the North and the U.S. have not narrowed their differences in denuclearization talks, on which inter-Korean relations depend heavily for any improvement.

North Korea declared the breakdown of the Stockholm meeting, saying that the U.S. had come to the negotiating table empty-handed and that it would be up to the U.S. as to whether the communist nation would maintain its moratorium on nuclear and long-range missile tests.

At a time when the North is focusing on denuclearization talks with the U.S., experts said that it could be hard to see Pyongyang turning its attention to South Korea, and in particular, such friendly cross-border exchange, because the regime could consider it a "distraction" from its efforts to extract as many concessions as possible from Washington.

"The North appears to be focused on denuclearization talks with the U.S., while expressing discontent with South Korea. All recent developments (with regard to the World Cup qualifier) can be said to be a continuation of that," Kim Yong-hyun, a North Korean studies professor at Dongguk University, said.

"It would be hard to see cross-border exchanges taking place even in the social and cultural areas unless a (positive) trend is not created in the process of denuclearization talks," he added.

Hong Min of the Korea Institute for National Unification said that North Korea wants to send an unequivocal message both to Seoul and Washington in terms of inter-Korean relations and future nuclear talks.

"The North seems to think that there would be nothing to gain by suggesting the possibility of an improvement in inter-Korean relations when it wants to show its strong determination in denuclearization talks," he said. "It is just like you do not smile when you get tough."