SEOUL, Oct. 14 (Yonhap) -- The union of Seoul Metro, the operator of subway lines 1-8, said Monday its unionized workers will stage a strike later this week unless their demands for improved working and pay conditions are met.

The Seoul Metro union gave the company management, the Ministry of the Interior and Safety and the Seoul Metropolitan Government until Tuesday to respond to its requests for the abolition of the company's wage peak system, manpower expansion and greater flexibility in work shifts.

Unionized workers of Seoul Metro plan to stage a temporary walkout from Wednesday to Friday if the Tuesday deadline is not met, the union said in a news conference in front of the Seoul Government Complex. 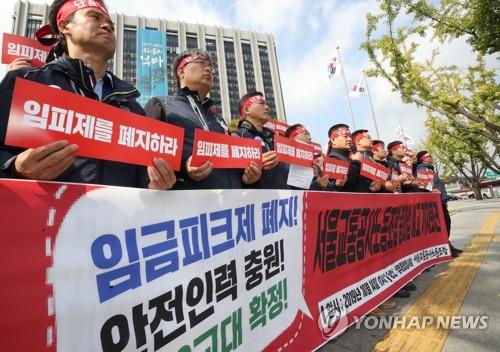 "The wage peak system was introduced in 2016, but wage increases for existing employees have been restrained due to insufficient expenses to recruit new employees," the union said in the news conference.

Complaining about extensive labor shortages, it noted, "Nearly 100 stations on subway lines 1-8 have just two shift workers. Due to manpower shortages, some crew members even work on their off days."

In a related move, the 19,000-member Korean Railway Workers' Union staged a 72-hour warning strike from last Friday to early Monday morning to press their demands for higher pay and better working conditions.