SEOUL, Oct. 15 (Yonhap) -- South Korea said Tuesday that it will hold a cosmetics road show in Dubai this week to help boost exports of cosmetic products by capitalizing on the rising popularity of the Korean wave of popular culture.

The K-cosmetics show, the first of its kind this year, will be held in the Middle Eastern hub Wednesday through Friday, with companies vying to win over consumers with the quality of their products, the Ministry of Food and Drug Safety said.

"The event will link cosmetics with Hallyu content such as Korean fashion, culture and K-pop," the ministry said.

South Korean companies have been pushing to harness the power of "hallyu" -- the Korean wave of popular culture -- to promote their products to foreign consumers.

K-pop -- which mostly features choreographed singing and dancing by boy or girl groups -- has gained ground in not only Asia, but in Latin America, Europe and the United States in recent years, and its impact is going beyond the realm of entertainment.

The ministry said cosmetics makers could hold one-on-one talks with potential buyers, with a forum to be held to exchange information on trade trends and restrictions imposed on makeup products. There will also be K-pop concerts during the road show.

The ministry said 36 South Korean cosmetics companies will take part in the event, along with 97 consumer beauty product manufacturers and 35 related content providers. It said 10,000 people are expected to take part and visit the gathering.

The road show will take place alongside the Korea Brand and Content Expo 2019 in Dubai, which is being sponsored by Seoul's Ministry of Culture, Sports and Tourism.

To boost exports of consumer goods, South Korea has been holding a series of hallyu expos in China, Indonesia, Vietnam and other countries since 2010. 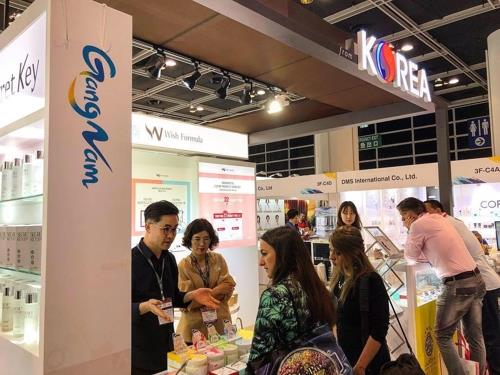 K-cosmetics road show to kick off in Dubai

K-cosmetics road show to kick off in Dubai