SEOUL, Oct. 15 (Yonhap) -- U.S. Ambassador to South Korea Harry Harris said Tuesday that the alliance between the two countries remains strong and vibrant as they work together to ensure peace and stability on the Korean Peninsula and beyond.

Harris made the remarks in the written version of his keynote speech for a seminar organized by the Association of the Republic of Korea Army and held in Seoul on the alliance. He was absent from the forum due to overseas schedules.

"It is through the tireless efforts of organizations like yours that the bonds between our two countries remain strong and vibrant," Harris said in the speech.

"As we go forward to meet the challenges of maintaining peace, stability and prosperity across the peninsula and beyond, we go together -- shoulder to shoulder," he said.

Concerns have arisen over possible friction between the allies following Seoul's decision to end a military information-sharing pact with Japan, despite Washington's appeals to keep the accord seen as a rare platform for trilateral cooperation between the South, the United States and Japan. 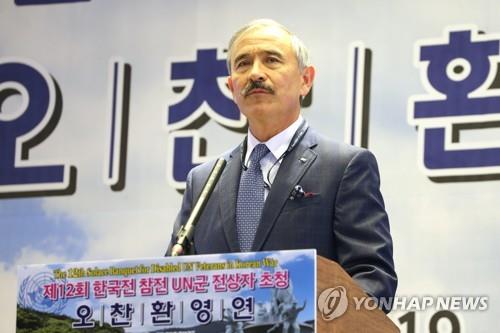