SEOUL, Oct. 15 (Yonhap) -- If ultrafine dust pollution reaches severe levels, a temporary holiday will be declared and an alternate no-driving day system will be enforced for private vehicles under the government's new contingency plan, the Ministry of Environment said Tuesday. 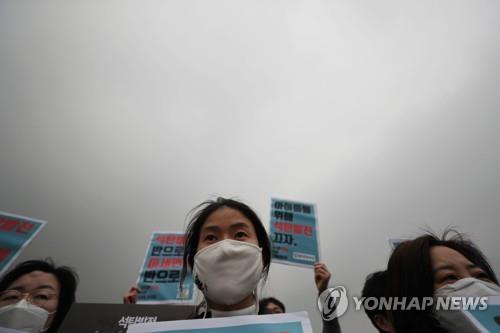 The government will gradually strengthen its dust reduction and public health measures in accordance with the four crisis levels.

Under the concern level, the alternate no-driving day system will be enforced for public vehicles and work hours will be reduced at construction sites.

Under the caution level, all public vehicles, except essential ones, will be banned from roads and fine dust masks will be distributed to kindergarten pupils and other vulnerable people.

In case of the warning level, private vehicles will be asked to voluntarily participate in the 2-day rotation system and public transportation services will be increased.

Under the severe level, all private vehicles will be forcibly subject to the 2-day rotation system, all schools and kindergartens will be ordered to close and a temporary holiday will be declared.