SEOUL, Oct. 15 (Yonhap) -- A large-scale biennial international aerospace and defense expo opened in South Korea on Tuesday, featuring cutting-edge weapons and serving as a venue for global defense diplomacy and exchanges of the latest defense technologies.

The Seoul International Aerospace and Defense Exhibition (ADEX) kicked off at Seoul Air Base in Seongnam, south of Seoul, earlier in the day to run until Sunday.

This year's exhibition, the 12th of its kind, brought together around 430 defense companies from 34 countries, the most ever for the event, with local and international defense firms setting up more than 1,700 booths to promote their products, according to the defense ministry.

"South Korea produces and exports a variety of the latest weapons systems for land and air power ... as well as maritime assets such as Aegis-equipped destroyers and submarines, and is acknowledged for its high level of technologies," Defense Minister Jeong Kyeong-doo said in his congratulatory remarks.

"Through the Seoul ADEX 2019, we seek to actively share our experiences and know-how ... to make the event a venue for mutual exchanges and cooperation," he added. 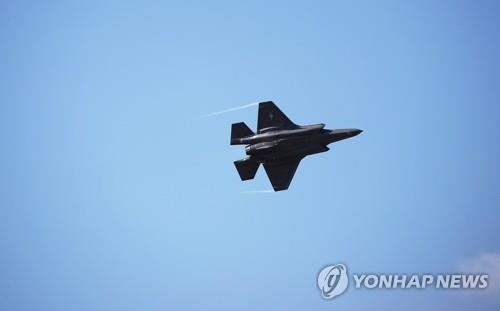 South Korea also unveiled a mock-up of its KF-X jet for the first time, an envisioned indigenous cutting-edge fighter aircraft under the project to develop the homegrown fighter to replace the Air Force's aging fleet of F-4 and F-5 jets.

"Based upon high-level technologies that have been accumulated so far, South Korea has been pushing to develop a KF-X fighter aircraft without a hitch with a goal to complete the project in 2026," Jeong noted.

At the venue, various types of aircraft and high-profile weapons systems are on display.

The Air Force's Black Eagles flight team and several civilian teams from abroad, including the "Maxx-G" from Australia, also showed off acrobatic displays.

On the sidelines, Jeong plans to hold a series of bilateral meetings with chief foreign delegates.

Various seminars are also planned to be attended by more than 95 defense ministers, military leaders and experts from 53 countries, during which they will launch active defense diplomacy and have business consultations regarding their military procurement projects, according to the ministry. 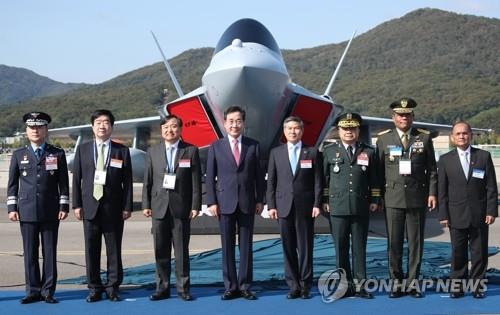