INCHEON, Oct. 15 (Yonhap) -- The Kiwoom Heroes moved within one victory of reaching the championship series in South Korean baseball on Tuesday, defeating the SK Wyverns 8-7 in a back-and-forth slugfest that featured four home runs and three lead changes.

By taking both games on the road at SK Happy Dream Park in Incheon, 40 kilometers west of Seoul, the Heroes pushed the 2018 Korean Series champions to the brink. 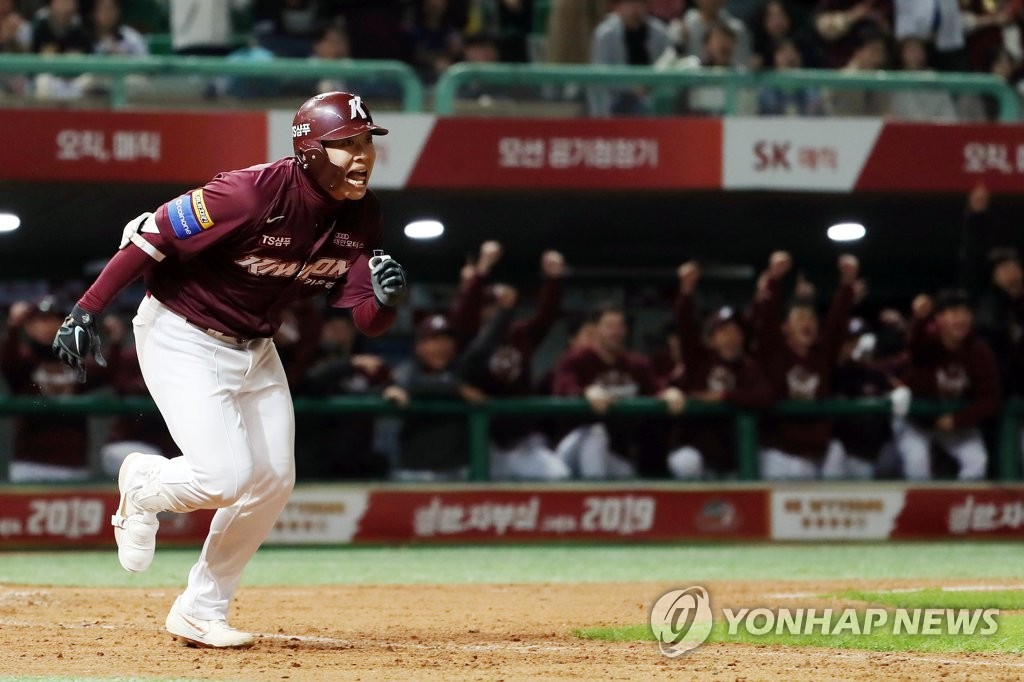 Game 3 of this series moves to the Heroes' home, Gocheok Sky Dome in Seoul, for Thursday, and a win will send the Heroes to their first Korean Series in five years.

Only two clubs have erased a 2-0 series deficit to win the best-of-five second round: the 1996 Hyundai Unicorns and the 2009 Wyverns.

After getting shut out 3-0 in Monday's Game 1, the Wyverns opened the scoring with Jamie Romak's solo shot off starter Choi Won-tae. Han Dong-min, who was 0-for-4 on Monday, smacked a two-run homer in the third inning for a 3-0 Wyverns lead.

But things quickly unraveled for the Dominican right-hander in the top of the fourth.

Kim Ha-seong opened with a double but he was thrown out at the plate trying to score on Lee Jung-hoo's follow-up single.

On that single, left fielder Ro Soo-kwang made a poor throw home that bounced off catcher Lee Jae-won, allowing two runners to each move up a base. Now with men at second and third, Kim Kyu-min drove a first-pitch fastball to left-center for a double that knotted the score at 3-3. 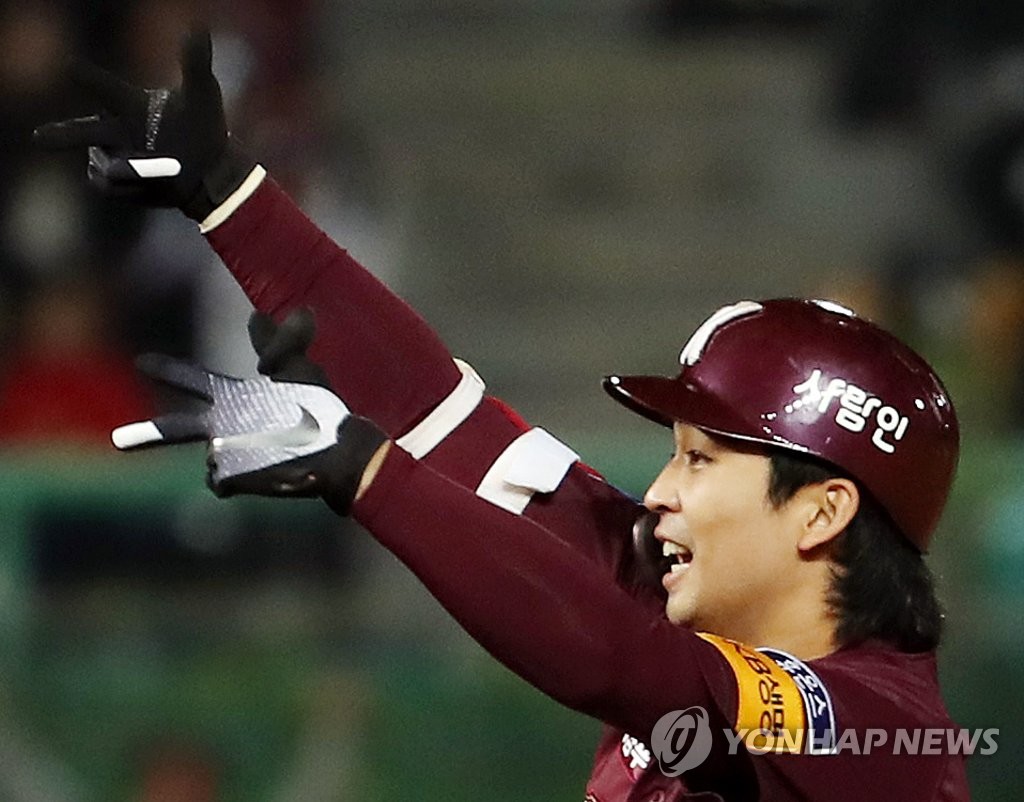 But after sending out seven relievers in an 11-inning loss the night before, the Wyverns had few viable options available in the bullpen to come to Sanchez's rescue.

And the Heroes completed their comeback against the tiring starter in the top fifth.

Seo Geon-chang's well-placed single to right field after Kim Hye-seong's double put the Heroes up 4-3. Kim Ha-seong then crushed 1-0 fastball from Sanchez for a two-run blast that put the Heroes ahead 6-3.

Sanchez was yanked after giving up a single to the next batter, Lee Jung-hoo.

The Wyverns' two mashers took the matters into their own hands. Han Dong-min followed his third-inning home run with a two-run double in the bottom fifth that cut it to 6-5.

Romak then launched his second solo home run of the night to open the sixth that made it a 6-6 game.

The Wyverns reclaimed the lead in the bottom seventh. With men at second and third, Kim Kang-min hit a soft bouncer at shortstop Kim Ha-seong, who had plenty of time to get the lead runner at home but bobbled the ball trying to field it with his backhand. The shortstop could only get the batter out at first as Kim Sung-hyun crossed the plate for a 7-6 SK lead.

The Wyverns had a man at third with just one out and the meat of their order coming up, a chance to pad their lead and even the series. But Cho Sang-woo, the imposing right-hander known for his blazing fastballs, struck out the next two batters, including Han Dong-min, on a slider to keep it a one-run game. 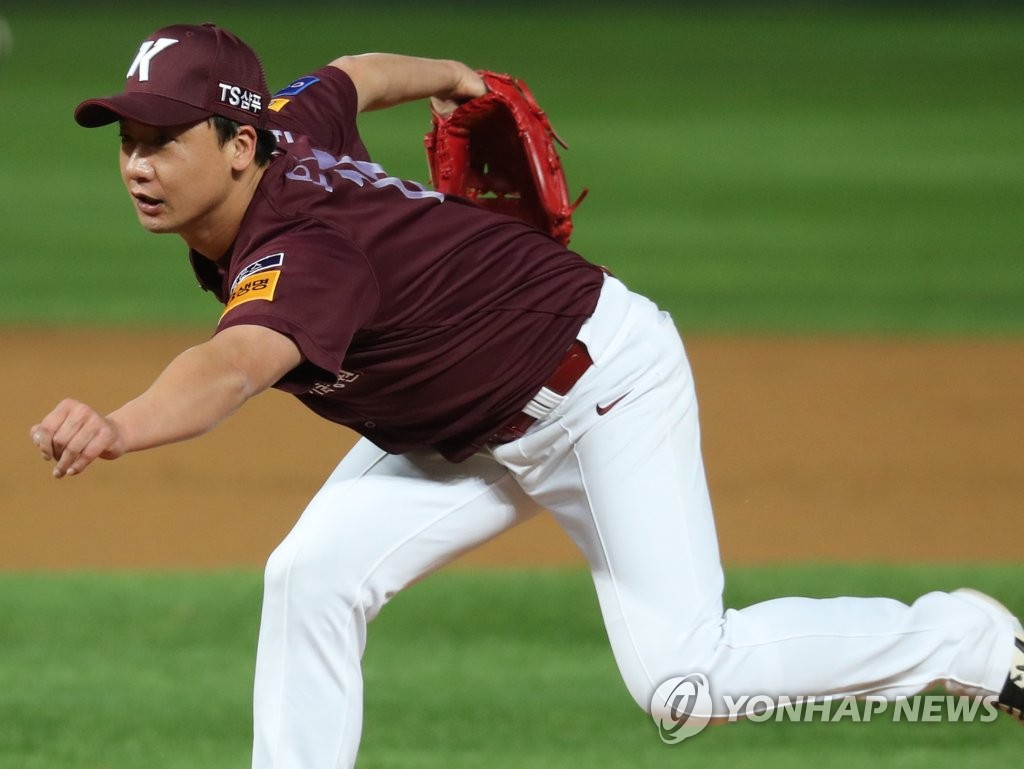 The Heroes had the answer in the top eighth and knocked around the Wyverns' tired relievers.

After getting the first out of the inning, Seo Jin-yong served up three straight singles, a run capped off by Lee Ji-young's game-tying single.

It sent Seo out of the game. And Song Sung-mun, coming off the bench, greeted new pitcher and Game 1 loser Moon Seung-won with a go-ahead double to right.

Moon retired the next two batters but the damage had been done.

The Heroes used seven relievers after starter Choi Won-tae went four innings, with none of them throwing more than an inning or making more than 18 pitches.

"This was a tough game for us because I didn't push the right buttons, and we pulled out the win thanks to these players," Jang said. "Those three pitchers cleaned up the mess I created."

SK manager Youm Kyoung-youb said Sanchez, who failed to get out of the fifth inning, pitched better than his line showed.

"He just made mistakes with runners on base, and Kiwoom hitters pounced on those mistakes," Youm said. "And we let guys in the bottom of their lineup get to us."

For the Heroes, every starter except Jerry Sands had at least a hit. No. 3 hitter Lee Jung-hoo went 3-for-5 and he's now batting 5-for-10 in this series.

For the Wyverns, Han and Romak combined for four hits, six RBIs and three runs scored.