The bronze statue of a girl was brought to Washington nearly three years ago in November 2016, but was stored at a warehouse while civic groups and activists sought an installation ground.

The activists have said they believe the Japanese government was thwarting their efforts as the issue of the sex slaves remains a sensitive subject in Seoul-Tokyo relations.

On Thursday, the figure will be installed in Annandale, in the front lawn of a building owned by a Korean, according to the organizers. On Oct. 27, a formal unveiling ceremony will also be held there, with a vocal former sex slave, Gil Won-ok, in attendance. 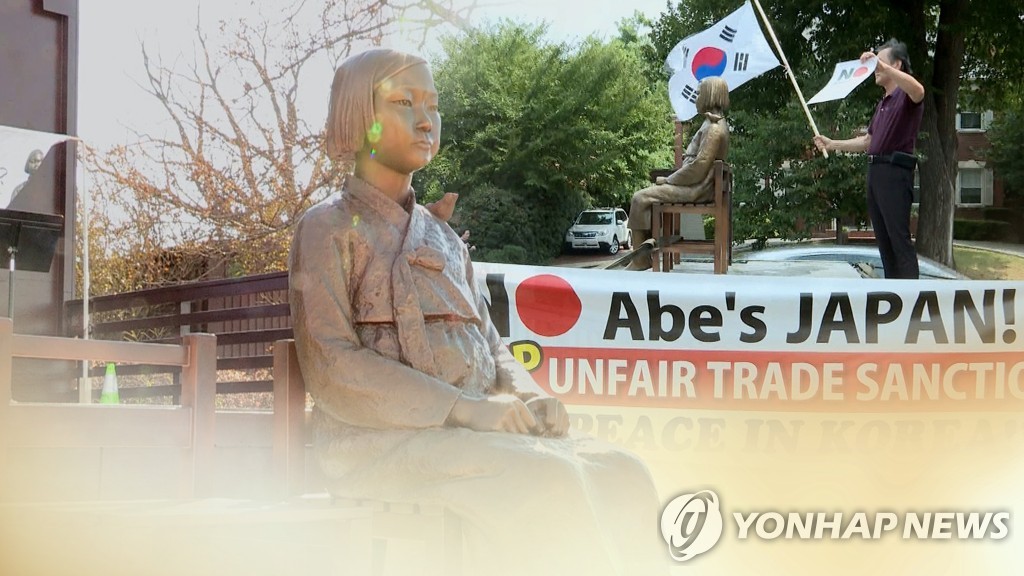 "By installing girl statues, we want to call attention to the history that Japan denies, resolve never to forget the victims, and educate future generations," said Lee Jeong-sil, head of the Washington Coalition for Comfort Women Issues.

"Comfort women" is Japan's euphemism for the sex slaves.

The coalition is one of three civic groups that joined together to form a committee for the statue's installation in Washington.

The committee plans to continue to seek an installation ground in the U.S. capital.

The move comes as relations between Seoul and Tokyo have deteriorated to their worst level in decades amid a dispute over trade and wartime history.

There are four similar statues across the U.S. -- in Glendale, California; Brookhaven, Georgia; Southfield, Michigan; and Manhattan, New York City.

Historians estimate that up to 200,000 women, mostly from Korea, were mobilized to work in frontline brothels for Japanese soldiers during the war. Korea was a Japanese colony from 1910-45.

In 2015, Seoul and Tokyo reached an agreement to settle the comfort women issue through Japan's monetary compensation, but the current government of President Moon Jae-in effectively annulled the deal last year after widespread criticism.

Statue of sex slave to be installed in Virginia

Statue of sex slave to be installed in Virginia