SEOUL, Oct. 16 (Yonhap) -- The Bank of Korea (BOK) on Wednesday slashed its policy rate by a quarter percentage point to 1.25 percent, noting the growth of the local economy may further slow without support for sluggish exports and domestic consumption.

"Based on currently available information, the board considers that the pace of global economic growth has continued to slow as trade has contracted," the BOK's monetary policy board said in a released statement.

"The global financial markets have shown high levels of volatility, affected mainly by the uncertainties concerning the U.S.-China trade dispute and the sluggishness of economic indicators in major countries," it added. 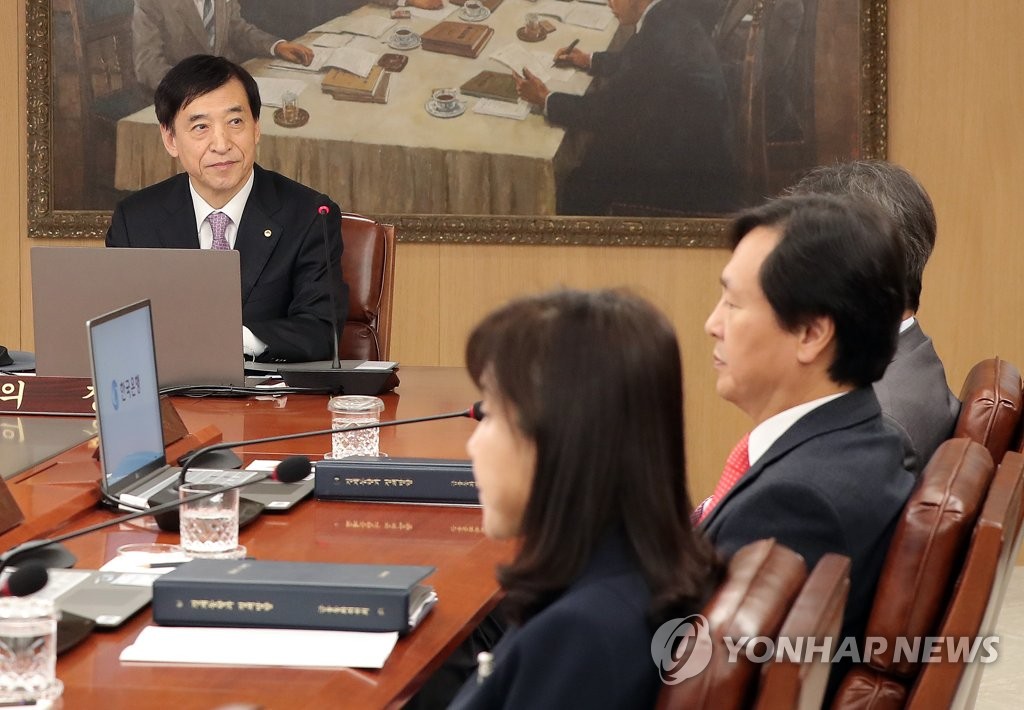 "The growth of the local economy continued to slow while exports also dwindled due to slowing global trade," BOK Gov. Lee Ju-yeol told a press briefing.

"The country's growth is expected to fall short of the July estimate due to a steady decline in exports and increased geopolitical risks," the top central banker added.

The BOK estimated the local economy to expand 2.2 percent in its latest projection, which marked a second down revision from the 2.6 percent projected in January and 2.5 percent in April.

The central bank is set to offer its final growth outlook for the year next month.

The second base rate cut in three months comes after 10 consecutive months of a decline in exports, while the rise in the country's consumer prices also dipped to a record low.

Lee has insisted the low inflation has largely been caused by a base effect created by a surge in prices of agricultural products last year.

He said the rise in consumer prices is expected to stay below 1 percent for the remainder of the year but breach the 1 percent mark early next year.

Wednesday's rate reduction is in line with market consensus. In a survey conducted by Yonhap Infomax, the financial news arm of Yonhap News Agency, 19 out of 21 experts polled had expected the central bank to slash the policy rate.

The cut, however, also comes amid concerns that it may lead to a sharp increase in household debt, which could put more downward pressure on the local economy down the road.

The country's overall household debt, including credit card spending, reached a record high of 1,556.1 trillion won (US$1.31 trillion) as of end-June.

The increase in household borrowing also accelerated, gaining 1.1 percent from three months earlier in the April-June period, compared with a 0.2 percent on-quarter rise in the first quarter.

The latest rate cut also widened the gap between South Korea's key rate and that of the United States, which currently sits in a range of 1.75 percent and 2 percent.

South Korea's policy rate has remained lower than that of the U.S. since March 2018, possibly creating a constant source of capital outflow, although the BOK says no such movement has so far been detected.

The BOK chief noted the country may again slash its base rate if necessary but said it will first carefully monitor the effect of the latest rate reductions in July and this month.

"I believe we still reserve policy room to take action when necessary. The BOK will maintain its easing stance while carefully monitoring the developments of major external factors and how they affect domestic prices and household debt," he said.

The decision to cut the rate was made by a split vote with two board members voicing a need to keep the rate frozen, he added.