The confirmation came a day after the wild boar carcass was found in the central border town of Cherwon, the Ministry of Environment said.

The deadly animal disease has been detected in seven dead wild boars near the border, including two in Cherwon, about 90 kilometers north of Seoul.

South Korea has begun to mobilize hundreds of soldiers and civilians to hunt down wild boars near the border to try to contain the further spread of African swine fever.

The move comes amid rising suspicions that wild boars may be responsible for the spread of the animal disease in South Korea.

The number of wild boars killed every month has increased to around 8,000 since July, up from 4,000 over the first half of 2019, according to the environment ministry.

South Korea has confirmed 14 cases of African swine fever at local pig farms since Sept. 17, when the country confirmed its first case of the deadly hog disease at a farm near the border with North Korea. So far, all reported cases have been in areas bordering the North.

In the latest suspected cases, blood tests of pigs from a farm in Yeoncheon, Gyeonggi Province, and the coast of Gochang, North Jeolla Province, came back negative late on Wednesday.

The virus is not harmful to humans but causes hemorrhagic fever in pigs that is almost always fatal. There is no antidote or vaccine and the only known way to prevent the disease from spreading is a mass cull of affected livestock.

The government has strengthened efforts to disinfect farms and transport vehicles and ordered several rounds of a 48-hour standstill on all pig farms, slaughterhouses and feed factories across the country to prevent the spread of the disease. There are around 6,300 pig farms raising more than 11 million pigs in South Korea and pig farming accounts for 40 percent of the total livestock industry.

The country has battled a number of animal diseases in the past. 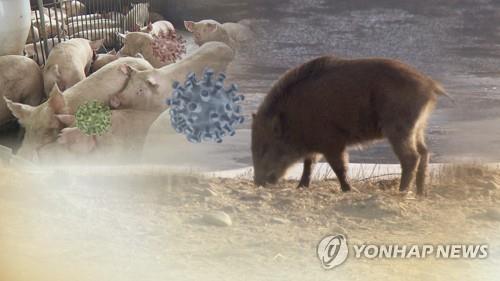