SEOUL, Oct. 16 (Yonhap) -- A total of 12 North Korean defectors have been caught attempting to return home to the North over the past five years, an opposition lawmaker said Wednesday, citing government data.

The 12 defectors were punished for violating the National Security Law after failing to reenter North Korea via third countries or through other means from 2015 to September this year, according to Rep. Park Joo-sun of the minor opposition Bareunmirae Party.

The convicted defectors were all subject to suspension or termination of protection from the South Korean government, Park said, citing data obtained from the Ministry of Unification for the annual parliamentary inspection of government offices. 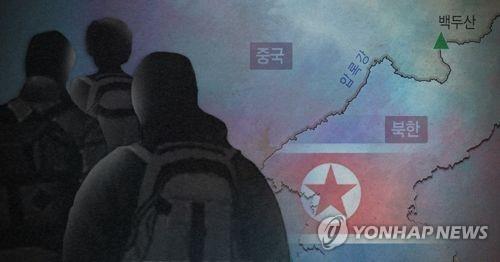 The Seoul government suspends or terminates its protection for North Koreans who attempt fake defections, try to return to the North or have been sentenced to more than one year in prison. As many as 139 defectors have lost the state protection in the five-year period after getting prison sentences longer than one year.

As of last year, more than 32,000 North Korean defectors were living in South Korea. The defectors attend government-run crash courses on capitalism and are given settlement funds and housing subsidies. But an increasing number of the former North Koreans are said to feel frustrated after encountering many problems adjusting to life in the South.

"Greater efforts should be made to prevent misconduct by North Korean defectors by helping increase their life satisfaction here," said Park.

Meanwhile, 64 defectors have been caught applying for refugee status in Europe and the United States after hiding records of their settlement in South Korea, according to the ministry data.

12 defectors caught trying to return to N. Korea since 2015: data

12 defectors caught trying to return to N. Korea since 2015: data