He delivered the message during a Cheong Wa Dae meeting with top ministry officials, a couple of days after Cho Kuk's departure. Cho, a close aide to Moon, abruptly stepped down 36 days after assuming the post.

The move followed weeks of street rallies for and against him in Seoul. Opponents claimed he was not qualified for the job as his family has been under probe for allegations of financial and other problems.

Moon said that it will take some time to pick Cho's successor but reforming the prosecution is a "very urgent task," according to Cheong Wa Dae.

Moon earlier said Cho has laid the groundwork to push for prosecution reform in earnest. Leaving the ministry, Cho also described himself as "kindling" for the drive.

Speaking with Vice Justice Minister Kim Oh-soo and Lee Seong-yun, director general of the ministry's bureau on prosecution affairs, Moon asked them to do their best to minimize loopholes in handling pending issues until a new minister takes office. 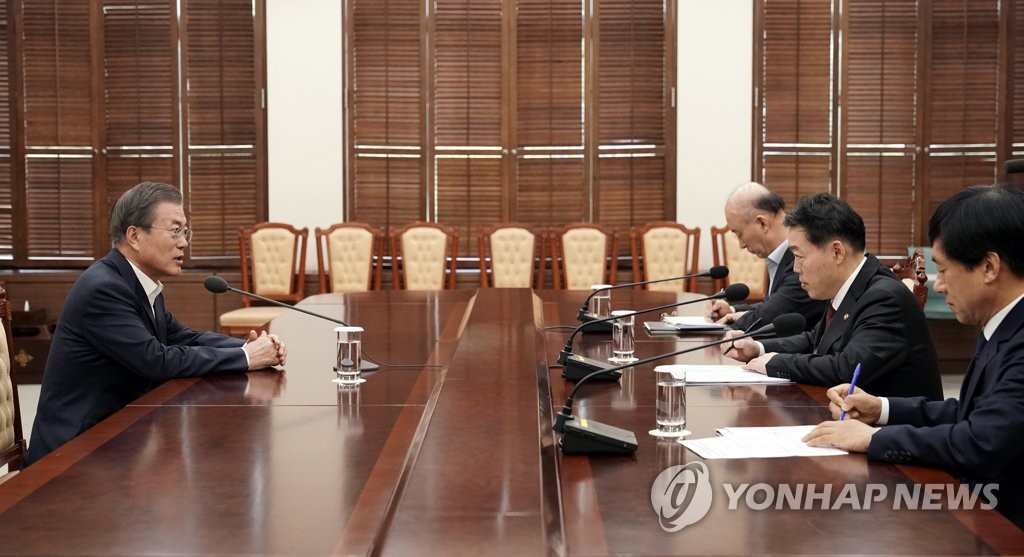 He also told them to continue to follow up on prosecution reform plans proposed by Cho.

The president, a former lawyer who served as senior presidential secretary for legal affairs under the Roh Moo-hyun administration, took issue with the current internal audit and inspection system.

The Supreme Prosecutors' Office has its own national inspection team for measures to discipline state prosecutors nationwide in case of wrongdoings. The Ministry of Justice has a similar function to keep prosecutors in check.

While the functions of the two organizations overlap, they have not been operating effectively, Moon said.

He instructed the officials to draw up a plan to improve the system and report it directly to him.

Prosecution reform, which is among Moon's campaign pledges, is one of the hottest political issues in South Korea these days, with just half a year to go before the general elections.

Supporters of the ruling bloc hope to maintain the rare momentum in efforts to reform the country's powerful prosecution, which has been elusive for a long time. Critics of the Moon administration argue, however, Cheong Wa Dae is pushing for prosecution reform for political purposes amid growing economic woes and falling public support.