Around 70 to 80 teams, each comprised of about 12 military officers, civilian hunters and quarantine officials, were sent to such border towns as Paju and Yeoncheon in Gyeonggi Province and Cheorwon and Goseong in Gangwon Province on Tuesday to hunt down wild boars with guns and traps through Thursday on a trial basis.

"We've wrapped up the 48-hour operation. Based upon the result, we are now reviewing its safety, effectiveness and appropriateness to decide whether to fully carry out the operation," defense ministry spokesperson Choi Hyun-soo told a regular briefing.

"No cases have been found where wild boars crossed the border into the South through fences inside the Demilitarize Zone (DMZ)," she added. 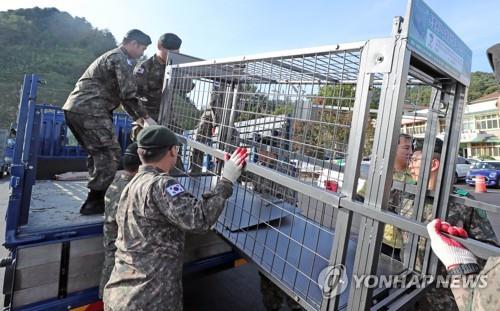