SEOUL, Oct. 17 (Yonhap) -- U.S. Ambassador to South Korea Harry Harris on Thursday hailed the alliance between the two countries as a linchpin for Northeast Asian security and called for its further development to tackle new challenges in the Indo-Pacific region and beyond.

Harris made the remarks in his congratulatory speech during the ROK-US Partnership Dinner event in Seoul co-organized by the Korea-U.S. Alliance Foundation and the Korea Defense Veterans Association.

"A secure environment is essential to create conditions necessary for the development. Accordingly, our security alliance continues to serve as a foundation for peace and prosperity on the Korean Peninsula, and it is a linchpin for security and stability throughout the region," Harris said.

Pointing out that the relations between the allies extend beyond security as the two sides build "the multi-dimensional partnership by shared values, shared concerns and economic interests," the ambassador said it is crucial to further develop the alliance as they confront new challenges in the Indo-Pacific region and beyond, such as North Korea.

"Over the last 66 years, the U.S. and South Korea lay this strong foundation. ... In the coming decades, I believe we will take it even further," Harris said, stressing his and his country's commitment to working with South Korea for future prosperity.

Earlier this year, concerns arose over possible friction between the allies following Seoul's decision to end a military information-sharing pact with Japan despite Washington's appeals to maintain the pact that was seen as a rare platform for trilateral cooperation. 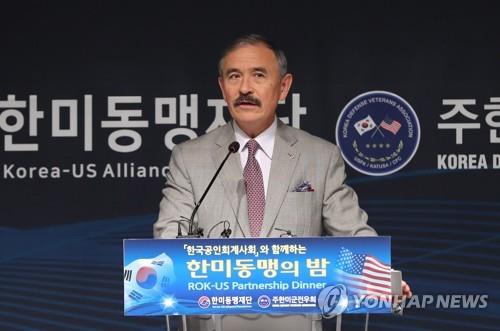