SEOUL, Oct. 19 (Yonhap) -- Four out of every 10 North Koreans urgently need food aid, the U.N. food agency has said, as crop production this year is expected to drop to its lowest level in five years due mainly to drought.

Only 56.3 mm of rain fell throughout North Korea from January to March 2019, the lowest since 1917, the Food and Agriculture Organization said. South Hwanghae province -- known as North Korea's breadbasket -- only received 50 percent of average rainfall from April to July 2019.

"An estimated 10.1 million people (40 percent of the population) are food insecure and urgently require food assistance," the FAO said in a recent report on food security.

Last month, Typhoon Lingling heavily hit North and South Hwanghae Provinces as well as South Hamgyong Province, which are now in their key harvest season, and 46,200 hectares of farmland either partially destroyed or damaged.

"If dry conditions have compromised the outcome of this yield, it is likely that the food security situation will deteriorate even further and sharply increase humanitarian needs," the FAO said. "This can have a serious impact on an already vulnerable population, which heavily relies on domestic production."

The food agency called for action over the next three months to mitigate the effects of prolonged dry conditions on food security.

In July, the U.S. Department of Agriculture estimated North Korea's 2019/20 rice production to stand at 1.36 million metric tons, unchanged from last year's decade-low production, and 17 percent below the five-year average.

South Korea had planned to send 50,000 tons of rice to North Korea in September in a move to ease conditions in the lean season, but North Korea rejected the offer in July in protest of a joint military exercise between South Korea and the United States.

North Korea has repeatedly called for the halt of the U.S. joint military drills with South Korea, which Pyongyang has long denounced as a rehearsal for invasion.

North Korea has long suffered from chronic food shortages, and the situation appears to have worsened in recent years due to significantly tightened sanctions on Pyongyang over its nuclear and missile programs. 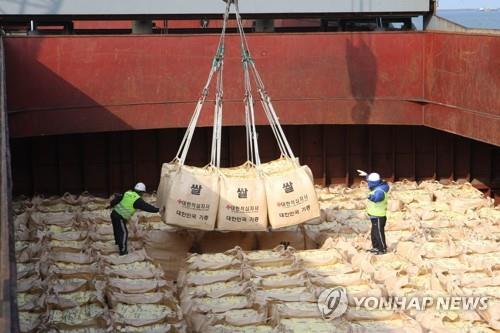