WASHINGTON, Oct. 19 (Yonhap) -- South Korean Finance Minister Hong Nam-ki has said the country's growth forecast for this year is expected to be lowered to between 2 and 2.1 percent, about the same level predicted by international organizations.

"I think this year's economic growth will likely be about the same level of the growth estimates announced by the International Monetary Fund (IMF) and the Organization for Economic Cooperation and Development (OECD)," Hong, who doubles as deputy prime minister for the economy, told reporters Friday on the sidelines of the Group of 20 meeting.

The IMF earlier lowered its growth forecast for South Korea's economy this year to 2 percent from its previous outlook of 2.6 percent amid a global economic slowdown.

The OECD also slashed its growth estimate for the country's economy to 2.1 percent, down from its previous forecast of 2.4 percent, amid a slowdown in global trade.

Earlier, Hong told lawmakers that South Korea appears unlikely to achieve its 2.4 percent growth target, but he said the government has no plan to revise down its economic forecast.

The minister further said the South Korean economy would grow between 2.2 and 2.3 percent in 2020, similar to the forecasts made by the IMF and the OECD.

"Next year's growth outlook is likely to be decided after partially taking into consideration the IMF and OECD forecasts," Hong said.

The global economy is forecast to grow 3 percent this year, down from an earlier outlook of 3.3 percent, according to the IMF.

The 3 percent growth projection marks the lowest level since the global economy contracted 0.1 percent in 2009 following the 2007-2008 global financial crisis, according to the ministry. 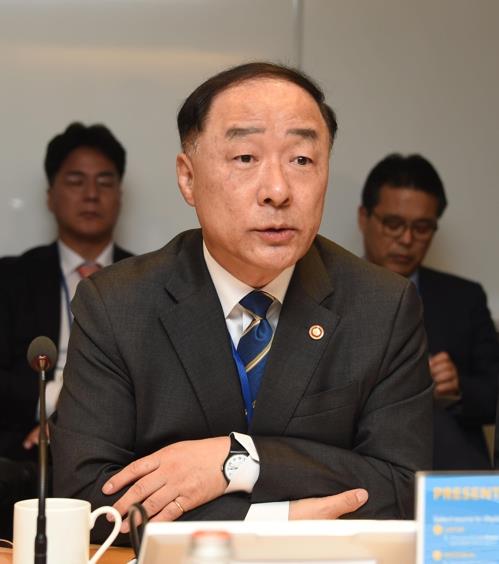