SEOUL, Oct. 20 (Yonhap) -- South Korea and China will hold high-level defense talks this week, resuming an annual dialogue that has been suspended since its last session in 2014 due to tensions over Seoul's decision to host an advanced U.S. missile defense system.

The two sides plan to "have in-depth discussions on the Korean Peninsula security conditions and issues of mutual concern," according to the ministry. 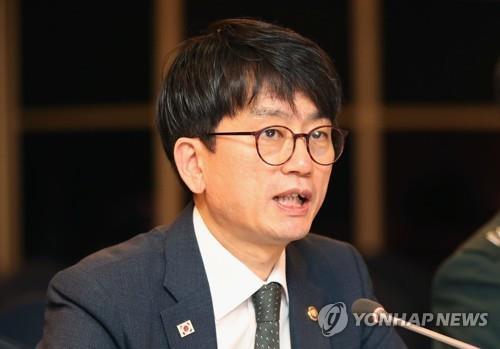 The neighboring countries agreed to commence the annual bilateral military talks in 2011. It served as a key communication channel between them on a number of issues, including the establishment of hotlines and the demarcation of an air defense identification zone (ADIZ).

The dialogue came to a halt in 2015, however, in the aftermath of a controversy over the deployment of the THAAD system in South Korea.

China strongly protested the installation of a cutting-edge radar system.

In the Monday talks, China is expected to raise the THAAD issue again. South Korea will likely take issue with repeated entries by Chinese warplanes into South Korea's ADIZ, or KADIZ. Seoul also hopes to set up additional military hotlines with Beijing.

Meanwhile, Park plans to attend the 9th Beijing Xiangshan Forum during his trip there.

He will explain Seoul's regional peace efforts. North Korea's vice defense minster, Kim Hyong-ryong, will also join the security forum. It's still uncertain whether the senior defense officials of the two Koreas will have a separate meeting.