The international maritime defense industry exhibition, MADEX 2019, is scheduled to run through Friday at Bexco Exhibition Center in the country's southern city of Busan. The Navy organized the event along with the Busan city government and the Korea International Trade Association.

This year's event brought together some 160 major maritime defense companies from 11 countries to showcase state-of-the-art maritime defense systems, as well as diverse navigation, communication and safety equipment, by setting up around 380 booths to promote their products, according to the Navy.

On the sidelines of the exhibition, various meetings and seminars are planned to be attended by around 80 military leaders and experts from 26 countries, the Navy said, adding that its officers are scheduled to hold bilateral talks with their counterparts from 21 countries.

"The event is expected to serve as a chance for business entities to actively promote their products and for defense officials to boost maritime security cooperation with partner nations," a Navy officer said.

"Around 180 rounds of business meetings are expected to take place during the exhibition, which would lead to our defense exports worth US$300 million," he added.

The MADEX defense fair was launched in 2001 and has been held biennially. 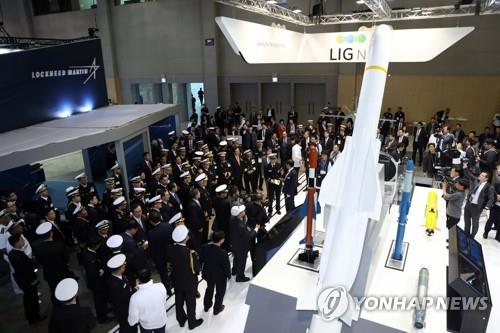