SEOUL, Oct. 22 (Yonhap) -- President Moon Jae-in pledged
a strong push Tuesday for the far-reaching reform of South Korea's education and prosecution systems amid no let-up in public criticism over his short-lived justice minister and calls for curbing prosecutorial power abuse.

In his budget speech at the National Assembly, Moon stressed the importance of promoting fairness to achieve the key policy goals of innovative, inclusive and peace-based growth.

"'Fairness' should be established anew in not just the economy but also social, educational and cultural fields," he said. "Once again, I realized the public aspiration for 'fairness' and 'reform.'" 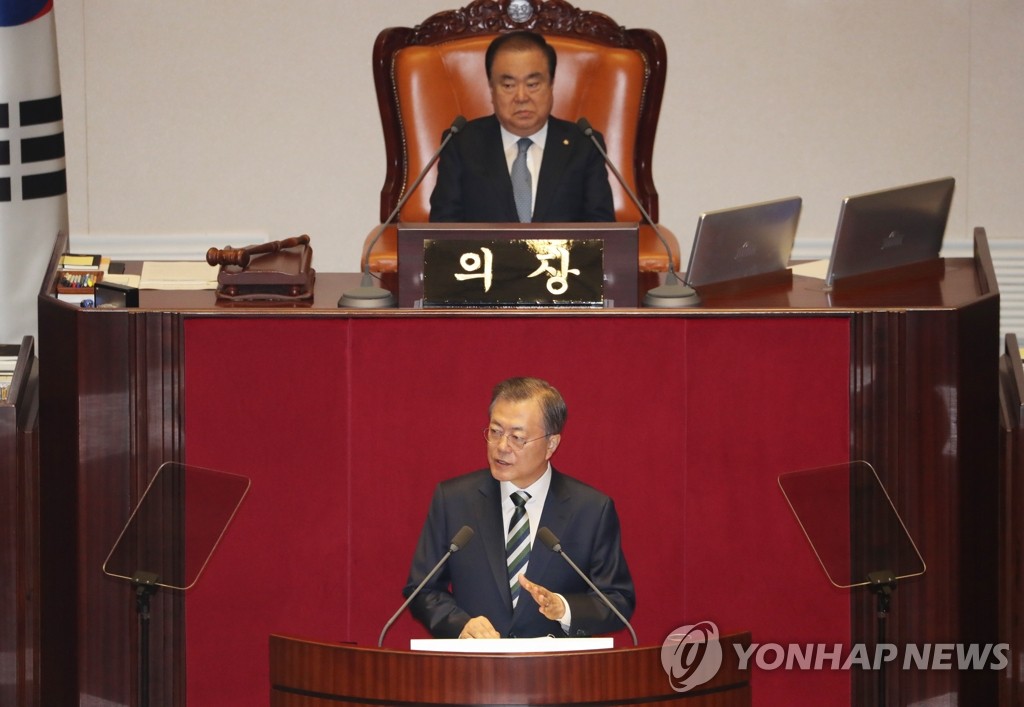 He was apparently referring to months of social rifts over his pick of Cho Kuk as justice minister. Cho, one of the closest aides to Moon, was given a mandate to spearhead the reform of the state prosecutors office accused of having too much power and authority.

Cho, however, has faced harsh public criticism over reported privileges and alleged irregularities involving his family. Cho stepped down last week, 35 days after his inauguration, but related controversies go on.

"The government has striven so far to eliminate privileges, irregularities and unfairness, prevalent in our society," the president said. "But the people's demands were much higher than that."

He pointed out the people's desire for a "fundamental change" even in the "legitimate impartiality" and perks inherent in the country's system.

"As the president, I will have a sense of heavier responsibility," Moon added.

He cited impartiality in education as "the most heartbreaking thing" for ordinary people here and vowed to overhaul the college entrance exam system to raise the proportion of "regular admissions," which focus more on applicants' academic grades than non-school activities. 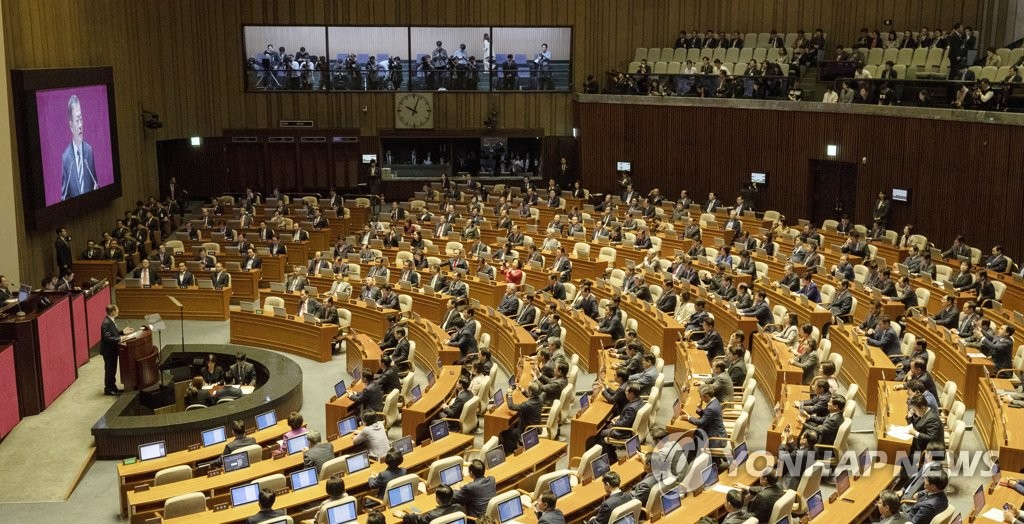 At issue, in particular, is the ruling bloc's push for the establishment of a special agency dedicated to investigating corruption among high-ranking officials.

Moon, a former lawyer, pointed out that there's no other effective alternative in case the prosecution is negligent in its audit and inspection of its internal corruption.

The envisioned institution is very meaningful as a special body to combat high-profile corruption even including a sitting president and his or her family members, according to Moon.

It will play a role in promoting integrity among high-ranking civil servants, he said.

He requested that the National Assembly "assume the most important role" for prosecution reform.

Another round of political dogfight is widely expected as the main opposition Liberty Korea Party (LKP) is staunchly against the move to create such an investigative agency.

LKP's lawmakers booed and made X signs with their arms, while Moon was raising the issue in the speech and members of the ruling Democratic Party (DP) clapped.

The conservative LKP claims that Moon is just in the search of a new political tool to shield its administration by debilitating the prosecution in the latter half of his tenure.

Moon used the word "fairness" 27 times in his 33-minute address, mainly intended to explain the government budget for 2020 and fiscal policy.

On the budget plan, Moon emphasized the need for an "active role" of finance, saying it should serve as a "breakwater" to block the waves of external shock and also "priming water" to help revitalize the economy.

Amid the rapid exacerbation of the world economy attributable to the spread of the Washington-Beijing trade row and protectionism, Moon said, Asia's fourth-biggest economy, heavily dependent on exports, is confronted with "severe situations."

"The Korean Peninsula is now facing the last crucial moment to move toward permanent peace," he said. "It's a wall of denuclearization we're going to have to cross over together. Only conversation can bring down the wall."

He urged North Korea to respond positively to his peace drive aimed at bringing a bright future for the communist nation via the "virtuous cycle" of fostering inter-Korean economic cooperation and establishing lasting peace. He has characterized it as "peace economy."

The LKP denounced Moon's speech, arguing it's in line with his "self-righteous" leadership.

"In a word, it was a frustrating budget speech" without any apology for the "Cho Kuk incident" and failure in the economic, diplomatic and security policies, the party's head, Hwang Kyo-ahn, said.

The DP called for bipartisan cooperation, citing the urgency of revitalizing the economy and improving the living of the people. 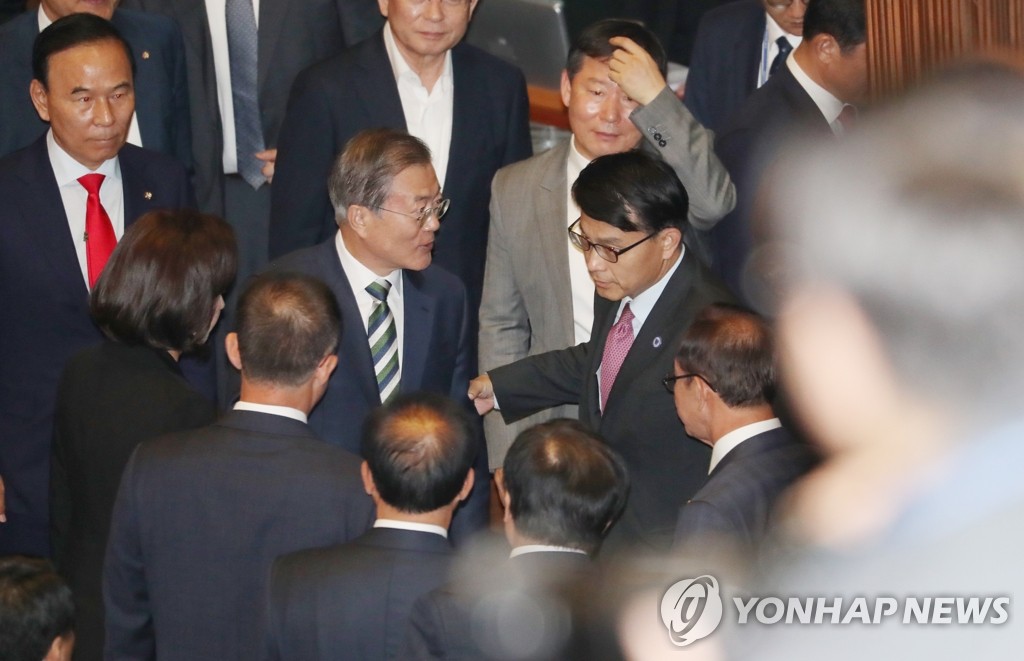 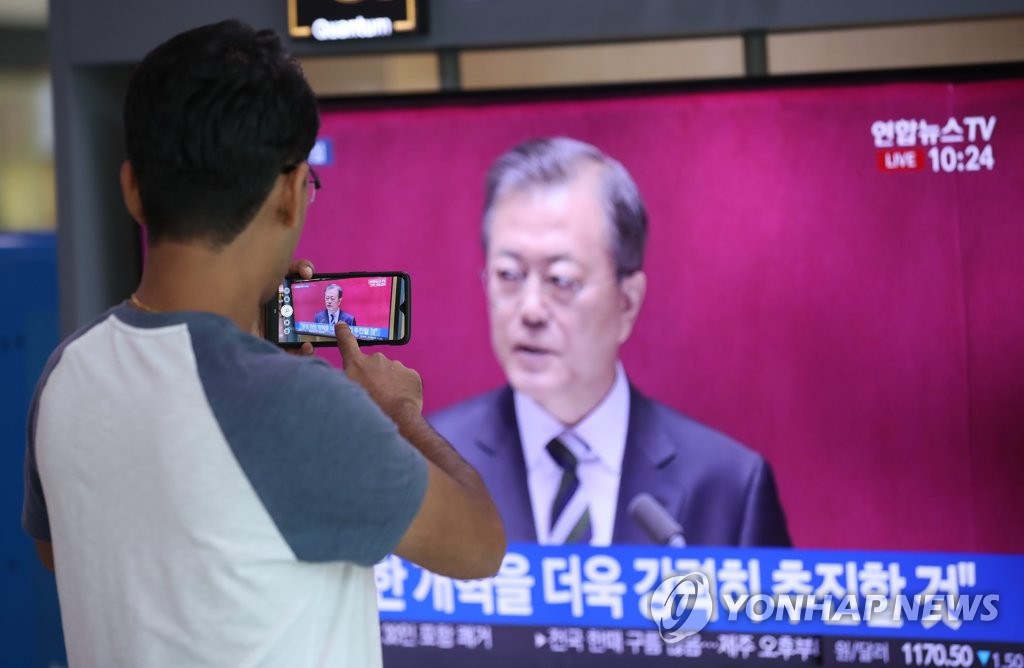