Calls have grown for a need to supplement UNC regulations on passage through the DMZ that divides the two Koreas after the command rejected several requests from South Korea to pass through the zone for nonmilitary purposes, such as inter-Korean exchanges.

"Regarding diverse issues on the entry, (the two sides) have had close discussions through multiple channels from high-level to working-level ones," defense ministry spokesperson Choi Hyun-soo told a regular briefing, adding, "We will continue to do so."

"South Korea has delivered its stance several times that a swift entry approval needs to be given for requests for nonmilitary purposes," the source said, noting that the UNC's authority could be limited to military activities in accordance with the armistice agreement.

But there have been differences between the two sides, as some UNC officials have raised the possibility of violating U.N. sanctions against North Korea through such an approval, another source said.

The UNC, which is an enforcer of the armistice agreement that halted the 1950-53 Korean War, has jurisdiction over the area.

On Monday, Unification Minister Kim Yeon-chul also acknowledged during a parliamentary audit that the two sides have shown differences over the matter and are having close discussions to reach a consensus.

"While keeping safety measures in place, I think there should be regulatory supplementation with regard to entry to and exit from the DMZ when it has a nonmilitary nature," Kim said, adding, "Under the armistice agreement, the right for permission is confined to things with a military character."

There have been several cases where the UNC rejected a request to enter the zone for nonmilitary purposes on the basis of "unconvincing" reasons, according to lawmakers.

In August last year, the UNC blocked South Korea from moving materials through the DMZ for a joint railway survey in North Korea. Earlier this year, vehicles to deliver the antiviral medication Tamiflu to North Korea were not allowed to cross the border, they pointed out.

During last month's U.N. General Assembly in New York, President Moon Jae-in proposed a plan to turn the DMZ into a peace zone, which experts say would increase the need to ease regulations on movement inside the area.

"We will review the relevant standards and procedures that could be reflected in the system, regulations and manuals," a unification ministry official told reporters. "In order to turn the DMZ into a peace zone, (we) need to survey the whole area, which will require consultations (with the UNC)." 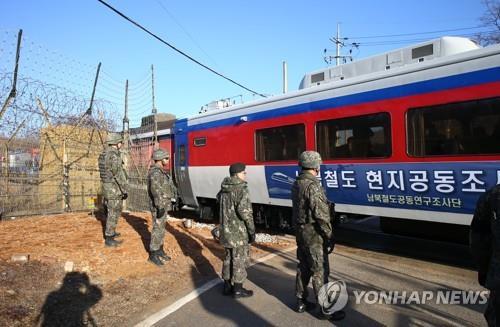