The 11-track record is DAY6's first music release since the previous EP, "The Book of Us: Gravity," released in July.

The new album goes back in time to revive many different retro music genres, including "LA metal," disco, bossa nova as well as reggae.

The album's main track, "Sweet Chaos," in particular, is a swing number whose BPM (beats per minute) is the speediest of all the band's previous main tracks. The second installation in DAY6's "The Book of Us" album series "features the process of changes a person's relationship with another person weaves," the band's main songwriter Young K said in a press showcase of the new album.

"The process is sometime heartwarming, but other times, it's chilling," he said, adding that the album's first six tracks cover the positive side while the rest of the tracks are about icy feelings.

Arguably the only K-pop idol rock band active in the global music scene as of late, the four-year-old band's career took off in earnest with the first "The Book of Us" album from July.

It topped local music charts including at a domestic K-pop competition TV program for the first time since its debut in 2015.

"I felt that we became a band that is better than before. With the record, I also began to feel the sense of responsibility, and I now want to repay (the support) through our performances," the band's main vocalist and guitarist Sungjin noted.

"Sweet Chaos" starts off with thundering drum sounds by the team's drummer Dowoon.

"When actually playing it, it is not as fast as it sounds. But the major challenge playing the part was to play it in a honest (unembellished) manner," he said.

Beside the main track, the album carries 10 other tracks including "Deep in Love," "Emergency," "Rescue Me," "Not Fine" and "Not Mine."

Overall, the album pictures the chaotic but dazzling entrance into a romantic relationship and chilling exit that follows.

The band is in the middle of its second world tour, "DAY6 World Tour 'Gravity,'" which will bring the band to 26 cities across the globe till the final stop in Madrid on Jan. 31, 2020.

Like its previous albums, the latest issue was composed and written entirely by the five band members, who seek to capture in their songs the true feelings of their generation.

"Our goal is doing music people could sympathize with. We have tried to do that and will be trying to do so going forward," the band's keyboardist Wonpil said. 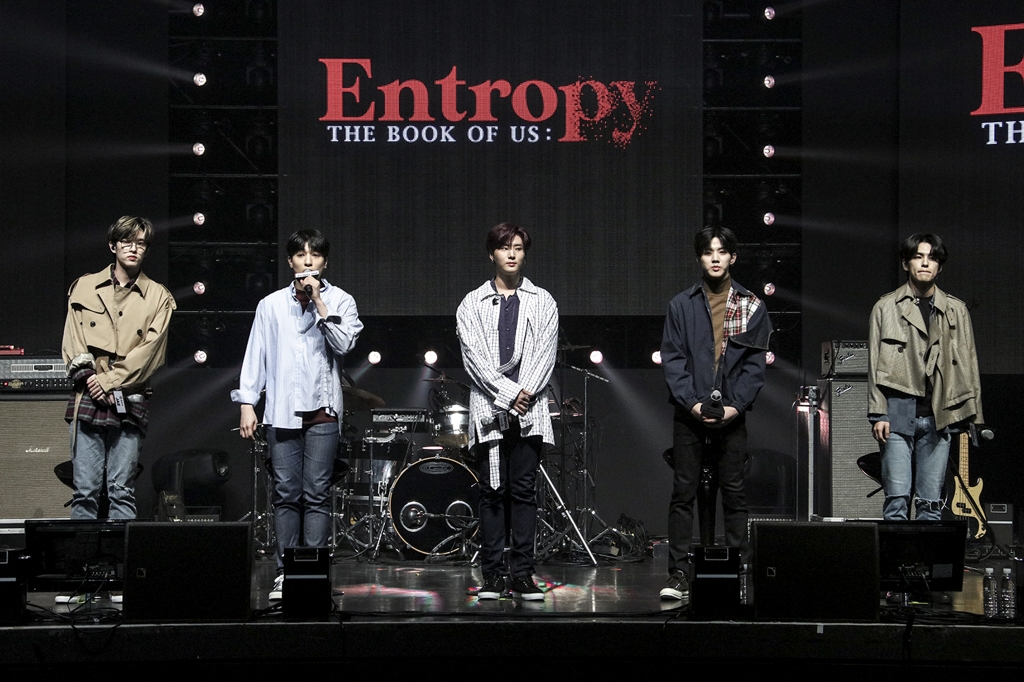 DAY6 returns with 3rd full album 'The Book of Us: Entropy'

DAY6 returns with 3rd full album 'The Book of Us: Entropy'