Oh Jae-il came through with a walk-off single in the bottom of the ninth inning as the Bears squeezed past the Kiwoom Heroes 7-6 in Game 1 of the Korean Series on Tuesday at Jamsil Stadium in Seoul.

The Bears saw their 6-1 lead evaporate before getting the last laugh in front of a sellout crowd of 25,000.

Teams that won Game 1 have gone on to win the Korean Series 26 of 35 times so far. 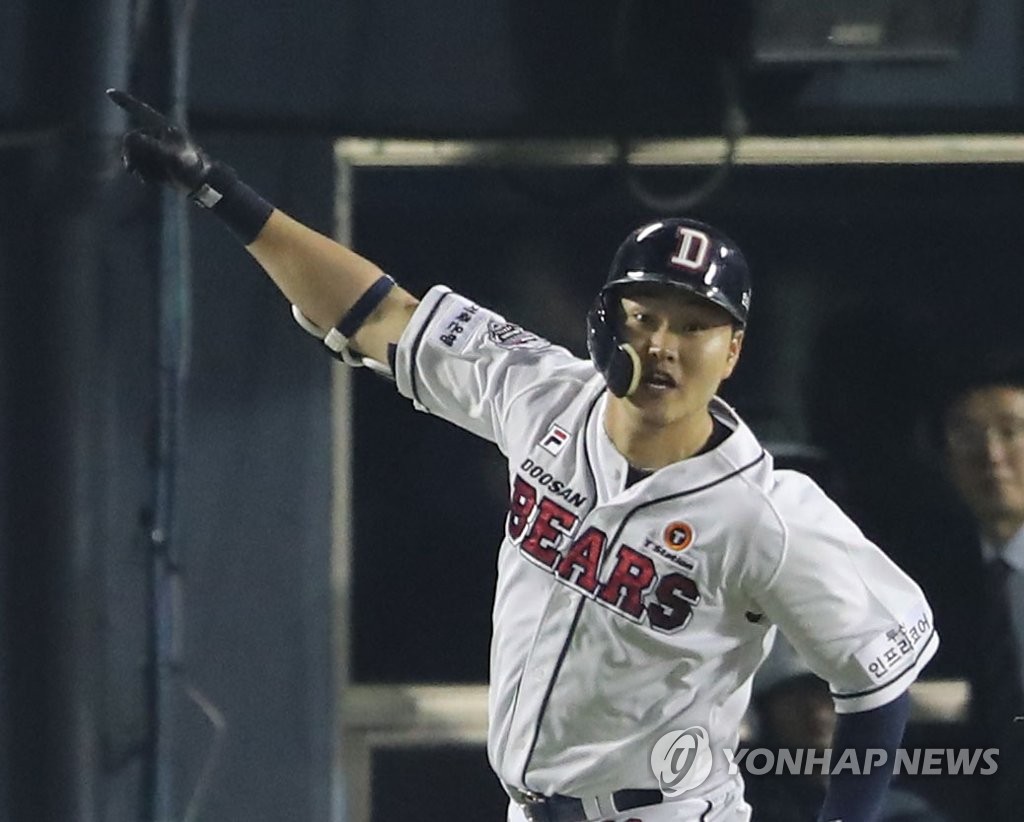 Game 2 is back at Jamsil Stadium for a 6:30 p.m. start Wednesday. The Bears are playing in their fifth consecutive Korean Series and are pursuing their first title since 2016. The Heroes are in their second Korean Series and they've never won the title before.

The Heroes wasted little time getting on the board against starter Josh Lindblom. No. 2 hitter Kim Ha-seong singled and stole second, and two batters later, Park Byung-ho drove him home with a sharp single up the middle for a 1-0 lead.

But the Bears erased the deficit in the bottom second. After three straight one-out singles loaded the bases, Kim Jae-ho drew a walk against starter Eric Jokisch to tie the score at 1-1.

The next batter, Park Sei-hyok, lined one to left field for a single that put the Bears ahead 2-1.

The Heroes failed to score after loading the bases with nobody out in the fourth. Kim Woong-bin lined out to right fielder Park Kun-woo, a scorcher that was hit too hard even for speedy Lee Jung-hoo to tag home from third base.

The Bears made the Heroes pay right away and blew the game wide open with four runs in the bottom fourth. 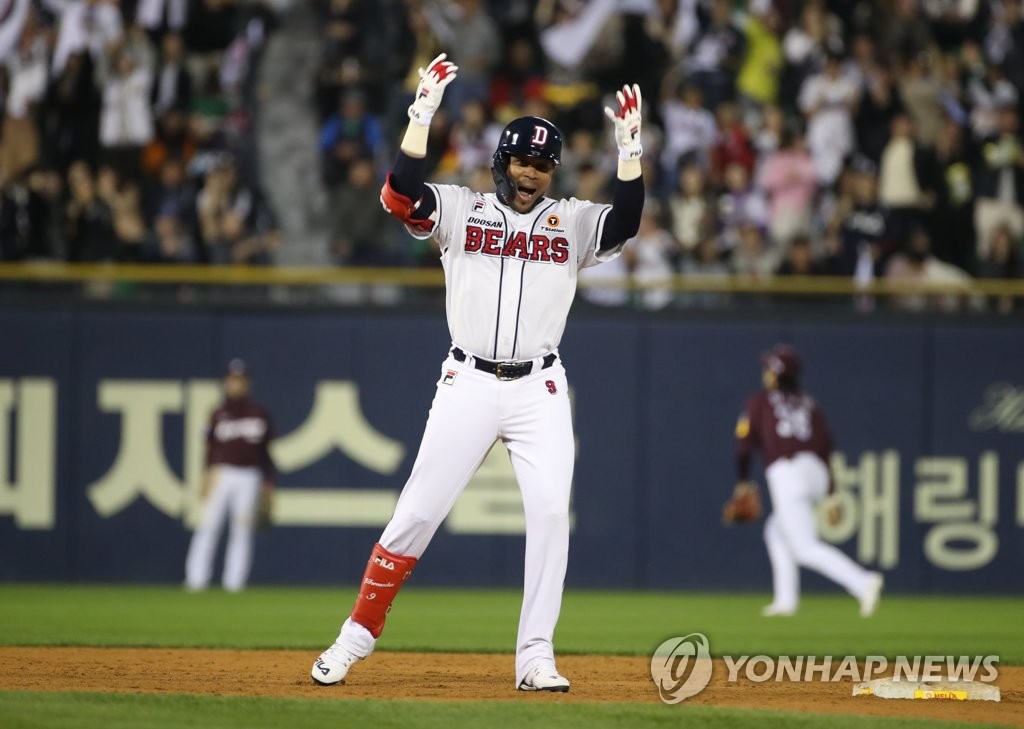 Heo Kyoung-min led off the inning with a single and moved to second when Jokisch got called for a balk trying to check the runner at first.

Kim moved to second on a groundout and sprinted home from second for a 4-1 lead with some heads-up base running, after third baseman Kim Woong-bin had Park Kun-woo's grounder deflect off his glove and trickle into shallow left field.

Park then advanced to second on a bizarre play, with catcher Park Dong-won's throw intended for second base striking Jokisch on the left side of his face.

Jokisch missed the zone badly with a pitch and looked toward the sky in frustration, not aware that his catcher was trying to catch the runner stealing second.

The American left-hander stayed in the game, but walked Jung Soo-bin to put men at the corners.

With Jokisch still on the mound, Jose Miguel Fernandez made it 6-1 Bears with a double to left. Left fielder Kim Kyu-min misjudged the flight of the ball and slid past the ball that sliced away from him.

Jokisch was relieved at the start of the fifth and was taken to hospital for further tests.

The Heroes rallied around Jokisch in the top sixth, scoring three runs to slash the deficit to 6-4 against the Bears' bullpen with Lindblom out of the game. 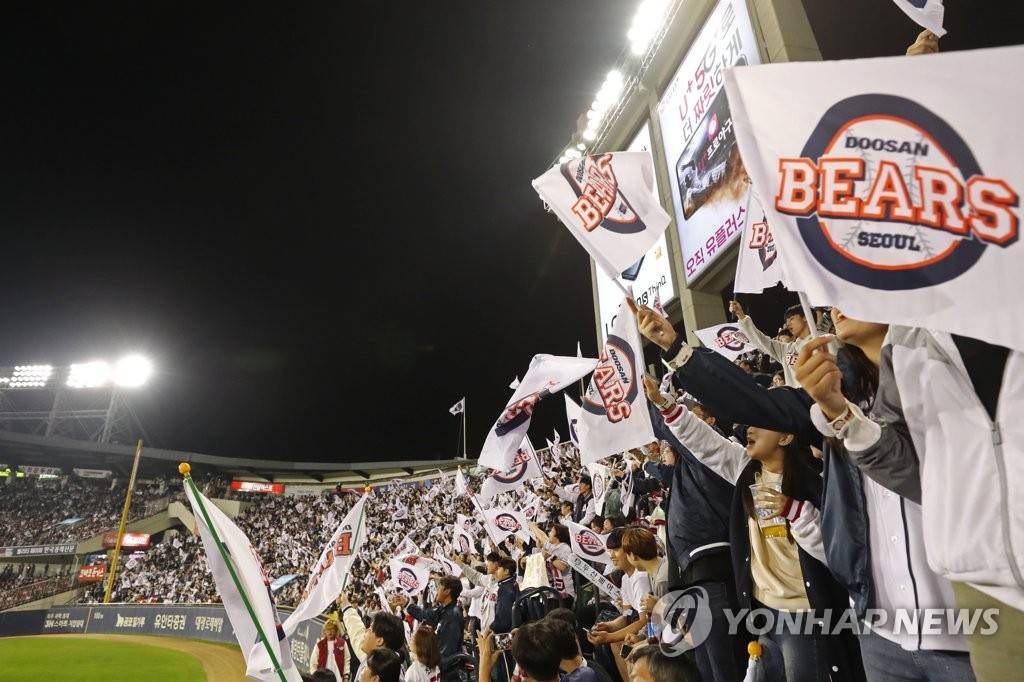 After a single and a walk, Jerry Sands' single up the middle made it 6-2. The Heroes then had the bases loaded two batters later and a sharp grounder by Park Dong-won brought in another run. Kim Hye-seong then hit a sacrifice fly to deep center that brought the Heroes to within 6-4.

The Heroes finally pulled even in the seventh, taking advantage of uncharacteristically sloppy fielding by the Bears.

First baseman Oh Jae-il was charged with an error when he let a pop fly by Kim Ha-seong drop between him and catcher Park Sei-hyok. Lee Jung-hoo followed with a single, and a flyout and a steal later, the Heroes had men at second and third with one out.

Sands' chopper to third scored Kim to make it 6-5. Then pinch hitter Song Sung-mun delivered the game-tying RBI with a single to left, knotting the game at 6-6.

The Bears survived a ninth-inning Heroes rally and capitalized on some defensive miscues by the Heroes to win the game in their last at-bat.

Shortstop Kim Ha-seong dropped a pop fly off the bat of Park Kun-woo to start the ninth. Jung Soo-bin laid down a bunt to move the runner over, but first baseman Park Byung-ho and pitcher Oh Ju-won both hesitated to field the ball, and Jung slid head-first to the first base bag to beat Oh's throw.

A one-out walk loaded the bases for Oh Jae-il, who drove the first pitch he saw over the head of center fielder Lee Jung-hoo to close out the win.

Two young homegrown pitchers will duel on the mound in Game 2 Wednesday.

The Bears will send 21-year-old right-hander Lee Young-ha, who enjoyed the best regular season of his career with a 17-4 record and a 3.64 ERA.

He had a 6.30 ERA with a 1-1 record in four regular season starts against the Heroes, though the number is a bit inflated by an Aug. 10 start in which he was roughed up for seven earned runs in three innings. In three other starts, Lee held the Heroes to seven runs in 17 innings.

The Heroes will try to even the series with the 20-year-old left-hander Lee Seung-ho on the hill. He's getting the nod ahead of the right-handed ace Jake Brigham, who is working on a streak of 12 scoreless innings this postseason. Lee was 3-0 in four starts versus the Bears with a 2.52 during the regular season.

The Bears were one of the worst-hitting teams against left-handers in the regular season, though they scored all seven of their runs on Tuesday against southpaws.