(ATTN: CLARIFIES para 8 according to government data)
By Koh Byung-joon

SEOUL, Oct. 23 (Yonhap) -- North Korean leader Kim Jong-un criticized his late father's policy of depending on South Korea for the development of the Mount Kumgang resort on the east coast, ordering the removal of "all the unpleasant-looking facilities" built by the South.

During a "field guidance" visit to the mountain resort, Kim also ordered the construction of the country's own "modern service facilities" and said the North "will always welcome our compatriots from the South" to the resort, according to the Korean Central News Agency (KCNA).

"The mountain was left uncared for more than ten years to leave a flaw and the land is worthy of better cause. He made a sharp criticism of the very wrong, dependent policy of the predecessors who were going to rely on others when the country was not strong enough," the Korean Central News Agency said in English. 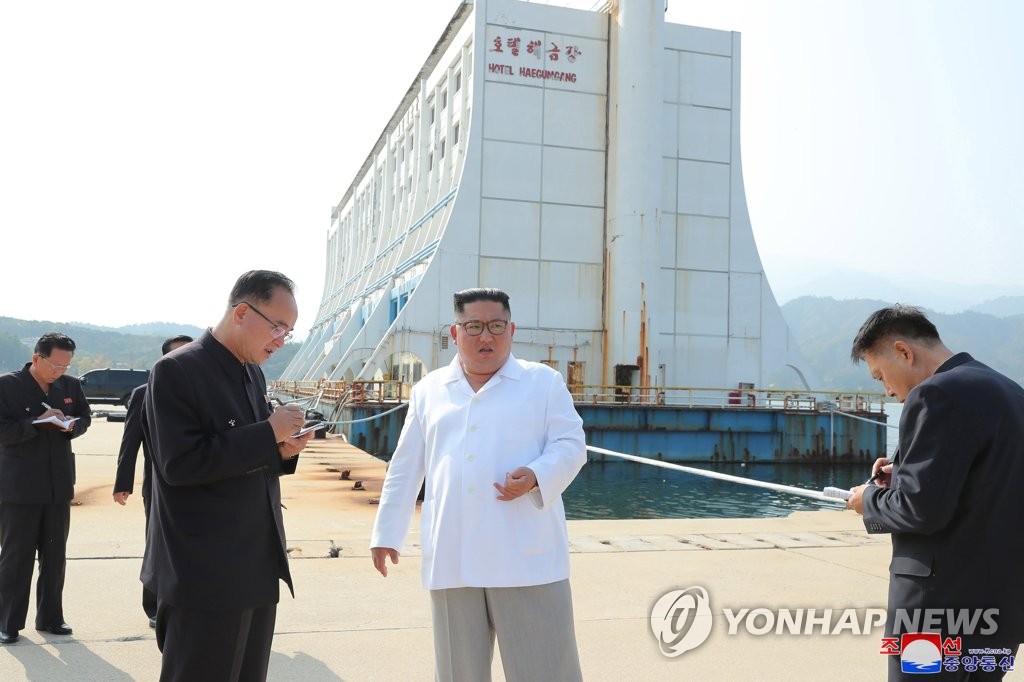 Tours to Mount Kumgang were launched in 1998 amid thawing inter-Korean relations, but they were suspended in 2008 after a female tourist was shot to death by a North Korean guard.

The tour program was regarded as one of the major inter-Korean cooperative projects, along with the now-suspended industrial park in the North's border town of Kaesong. Both were carried out when Kim's late father, Kim Jong-il, was in power.

It is very rare for Kim to publicly criticize one of his father's policies in a country where leaders' decisions are regarded as always right and bulletproof.

There are facilities and buildings constructed by the South Korean government and companies, including Hyundai Asan Corp., which operated the tour program to the mountain. Pyongyang has confiscated or frozen most of those facilities, including hotels, a golf course," since the tour suspension, an action Seoul has protested and not recognized.

Seoul has sought its resumption in the hope that the cross-border project could reduce tensions and contribute to denuclearization talks between Pyongyang and Washington. But little progress has been made in the face of sanctions banning economic projects involving North Korea.

Pyongyang has repeatedly called for the implementation of the agreement and demanded Seoul take initiative in inter-Korean affairs independent of intervention by the United States.

Kim's trip to Mount Kumgang and calls for the development of the area without South Korea appears to be aimed at expressing displeasure with little prospect for the resumption of the tour program anytime soon amid stalled denuclearization talks between Pyongyang and Washington.

Kim said it is a "mistaken idea" and a "misguided understanding" to say that Mount Kumgang is a common property of the two Koreas and tours to the mountain will not be possible without the development of inter-Korean relations.

"Mt. Kumgang is our land won at the cost of blood and even a cliff and a tree on it are associated with our sovereignty and dignity," he was quoted as saying. "He set forth detailed tasks for wonderfully developing modern cultural tourist resort in Mt. Kumgang area so that the people can rest, fully enjoying the natural scenery of the country."

He kept the door open to South Koreans seeking to visit the mountain but affirmed that it is not South Korea's right but the North's to lead the tour program there.

"We will always welcome our compatriots from the south if they want to come to Mt. Kumgang after it is wonderfully built as the world-level tourist destination but what is important is for our people to have the shared view that it is not desirable to let the south side undertake the tour of Mt. Kumgang, our famous mountain," he said.

Seoul's unification ministry handling inter-Korean affairs said that it is currently figuring out the exact intention and facts behind Kim's remarks. But it also noted that the South is ready for discussions with the North in order to protect the property of its people, respect the spirit of inter-Korean summit agreements and continue to push for resumption of the suspended tour program to the mountain.

Asked about how to respond to the possibility of Pyongyang going ahead with its plan to remove South Korean facilities despite Seoul's objection, Lee Sang-min, the ministry's spokesperson, declined to elaborate, saying just that the government will do its best to protect the property and business rights of its citizens.

His wife, Ri Sol-ju, was also seen in photos released by the KCNA, though her name was not mentioned in the media. It is her first reported activity in about four months as she has been absent from public view since June. 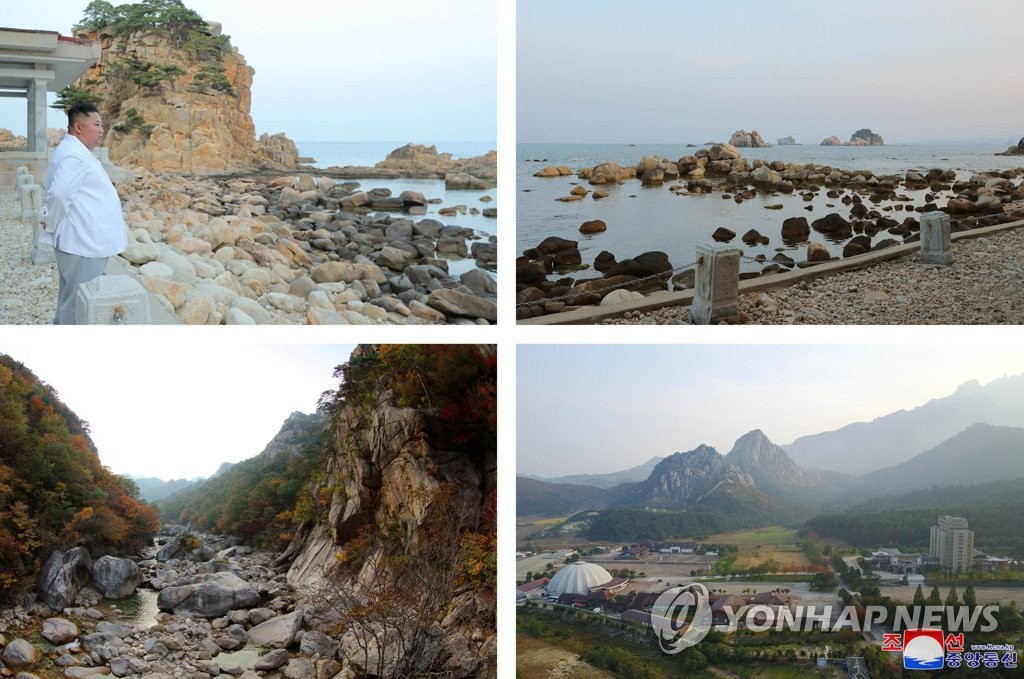