SEOUL, Oct. 23 (Yonhap) -- South Korea on Wednesday strongly advised people not to use flavored e-cigarettes, joining a wave of nations around the world that have imposed tougher regulations amid growing health risks linked to vaping.

Park said recent incidents of deaths and illnesses in the United States added urgency to its review of policies against vaping and e-cigarettes.

"As several serious respiratory illnesses and deaths have been reported in the United States and South Korea, (the government) strongly warns against usage of e-cigarettes until their link to the (the diseases) are clearly identified," Park told reporters.

"As (e-cigarettes) are directly related to public health, stronger regulations on tobacco products need to be promptly approved in the parliament, and the government will make a concerted effort for its passage." 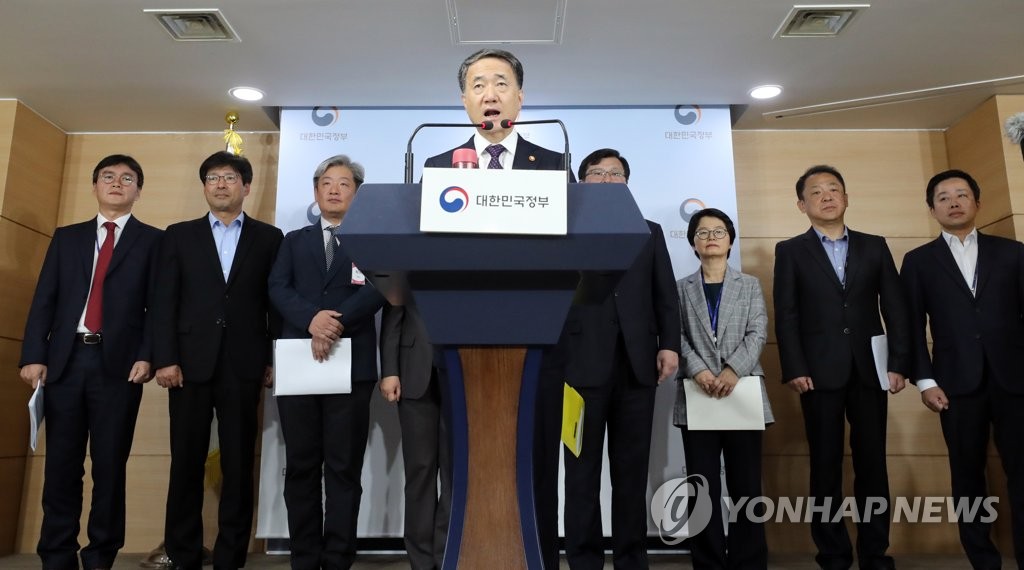 The measures follow government recommendations regarding the use of flavored e-cigarettes after concerns over e-cigarette use among young people led to a backlash against vaping in the U.S.

The government said it will tighten security measures on e-cigarettes and imports of liquid nicotine and crack down on the sale and promotion of illegal tobacco products.

It also vowed to require tobacco manufacturers and importers to submit documents on e-cigarette components and apply stricter regulations on the materials.

A total of 36 e-cigarettes by 11 tobacco companies are currently being sold in the nation, while unregulated vaporizing products made of nicotine stem and root are known to be available on the black market.

In May, leading e-cigarette company Juul Labs launched its product in South Korea to target the growing number of vaping device users in the country. South Korean tobacco manufacturer KT&G soon after rolled out its e-cigarette, Lil Vapor, to counter competition with the U.S. startup.

The ministry strongly warned against usage of e-cigarettes, especially among youth, pregnant women, patients with lung disease and non-smokers, and recommended teachers and their parents to closely monitor e-cigarette usage among adolescents.

It advised vape users who have respiratory problems and other health issues to visit hospitals to check on their lungs.

Public health officials also warned against arbitrary changes in the e-cigarette devices and components in cartridges as well as usage of tobacco products sold on the black market.

The guidance came as countries around the world move to ban devices that have been linked to deaths and youth addictions.

The U.S. Centers for Disease Control and Prevention (CDC) has recommended against using e-cigarettes after an outbreak of vaping-related lung injuries that has sickened more than 1,400 people and killed 33 was reported in the United States.

Walmart has stopped selling e-cigarettes, and several retailers have announced plans to restrict the sale of flavored vaping products, with critics saying the flavors target young people and get youth hooked on nicotine.

The global market for e-cigarettes was worth $15.7 billion in 2018 and is projected to more than double to $40 billion in 2023, according to market researcher Euromonitor International.

Although the causes of vaping-related illnesses are not known, about 20 nations, including Australia and Canada, have restricted the sale of e-cigarettes.

An official at Juul Labs in Korea said the company understood the government's concerns about liquid e-cigarettes.

An official at KT&G said the state-run tobacco company will follow the government's measures, depending on the results of an investigation into the health risks of using liquid e-cigarettes.