POSCO said its latest exploration of the Salar del Hombre Muerto salt lake in northern Argentina showed that the site contains more lithium reserves and salt water than it expected. Originally, POSCO estimated that it can produce 25,000 tons of lithium hydroxide a year from the salt flat for the next 20 years, but now the company claims it can continue to extract for another 30 years.

POSCO bought lithium mining rights in Argentina from Australian lithium miner Galaxy Resources for US$280 million in August 2018. Currently, the steelmaker has mining rights for an area of 22,800 hectares in the region.

POSCO said its demo plant in Argentina for lithium extraction will be completed by the first half of 2020 and that it aims to have an annual production capacity of 25,000 tons.

POSCO has been moving aggressively to secure lithium, a key metal for EV batteries, in recent years.

The company signed a deal last February to acquire a 9.5 percent stake in lithium and tantalum producer Pilbara Minerals.

The steelmaker said it aims to produce 65,000 tons of lithium a year in the upcoming years. 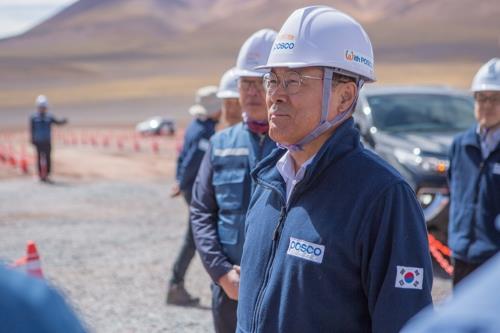