That's just how the Doosan Bears roll in the Korean Series.

The Bears scored three runs in the bottom of the ninth inning to rally past the Kiwoom Heroes 6-5 on Wednesday in Game 2 of the championship series in the Korea Baseball Organization (KBO).

Park Kun-woo punctuated the thrilling comeback with a walk-off single off reliever Han Hyun-hee, as the Bears took a solid 2-0 lead in the best-of-seven series. 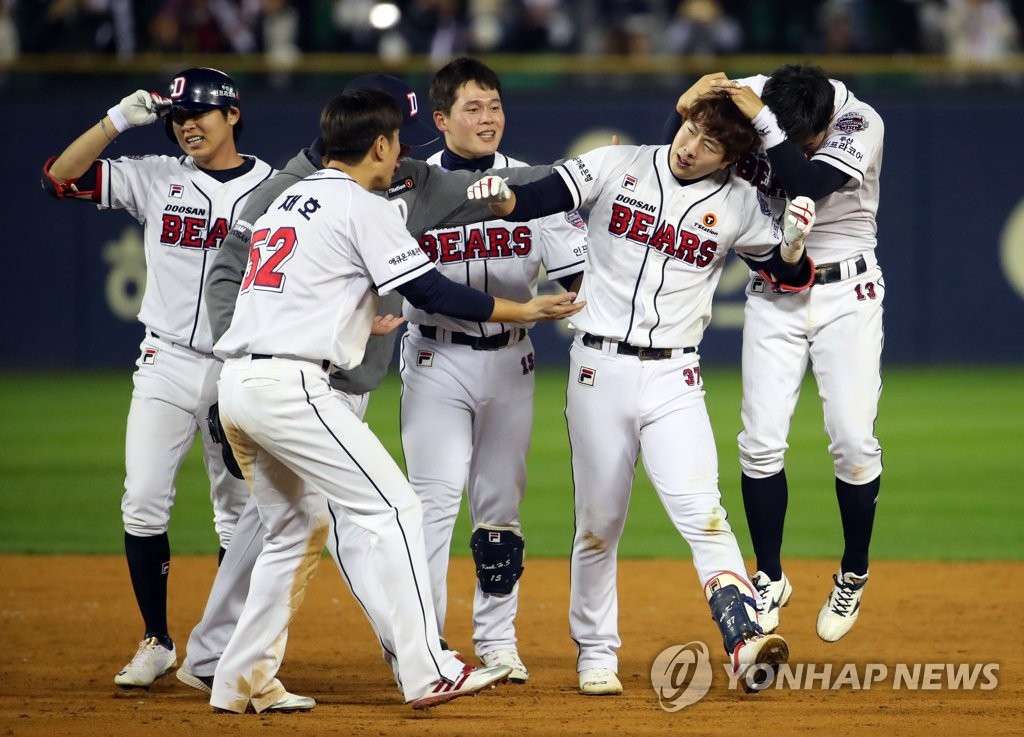 The Bears won the opening game on Tuesday 7-6 with a walk-off single by Oh Jae-il in the bottom ninth. This marked the first time in Korean Series history that a team won consecutive games in its last at-bat.

The best-of-seven series moves to the Heroes' home, Gocheok Sky dome in Seoul, for Games 3 and 4 on Friday and Saturday and, if necessary, Game 5 on Sunday.

"It feels great to win for two straight days in such a dramatic style," Doosan manager Kim Tae-hyung said. "With two straight wins at home, I think our guys will be able to compete with more confidence on the road."

For the second straight game, the Heroes opened the scoring in the top of the first. Seo Geon-chang drew a walk to open the game against starter Lee Young-ha and moved to third on a bloop single by Jerry Sands. Lee Jung-hoo then brought Seo home with a sacrifice fly to right.

The Heroes doubled the lead with another sacrifice fly in the top of the second.

Song Sung-mun, who came into Game 2 amid controversy over his expletive-laden trash talk from Game 1, led off with a triple down the right field line as boos rained down. Two batters later, Kim Hye-seong hit a deep fly to left field to score Song.

The Bears couldn't touch Kiwoom starter Lee Seung-ho for the first three innings but tied the game with one swing of the bat.

After Kim Jae-hwan's two-out single, Oh Jae-il, who came through with a walk-off single in the bottom ninth in Game 1, blasted a two-run home run into the right field seats, making it a 2-2 affair. 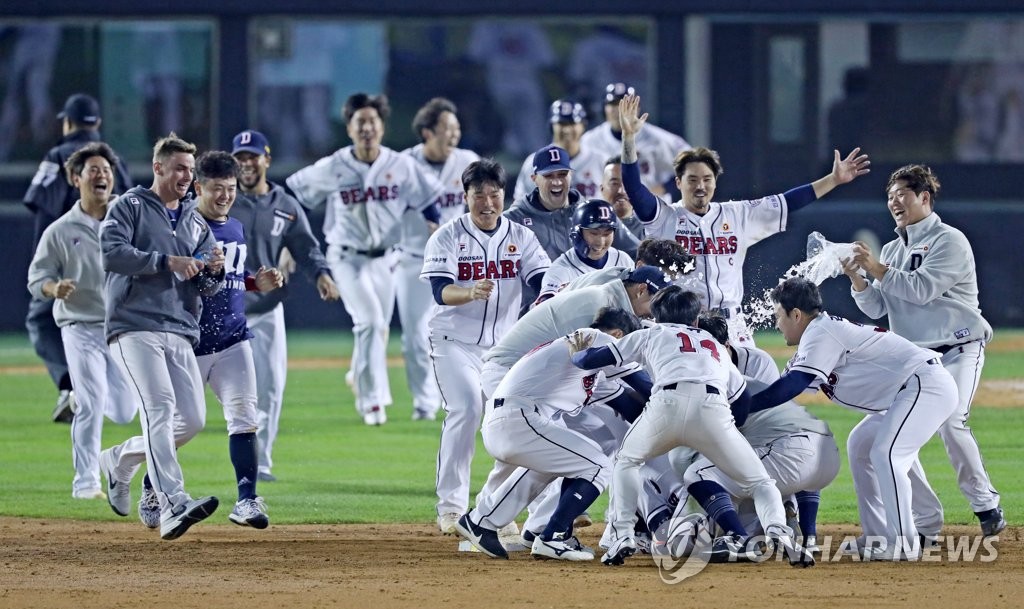 It was the first home run of the series and Oh's eighth career postseason long ball.

The Heroes reclaimed the lead with three runs in the top sixth. Cleanup Park Byung-ho, who'd struck out swinging on sliders from Lee Young-ha in two earlier at-bats, lined a double to left-center on Lee's hanging slider to drive in Sands from first.

After a walk, Song poked a single through the hole on the right and Park slid home for a 4-2 Heroes lead.

Lee Ji-young made it 5-2 for the Heroes with a single to left, knocking Lee Young-ha out of the game in the process.

The Bears tried to respond in the bottom sixth but couldn't cash in after putting two men on with one out.

Cho, a fireballer who threw 32 pitches in two shutout innings on Tuesday, struck out cleanup Kim Jae-hwan swinging on a high fastball and then got Oh Jae-il to fan on a hard slider.

The Bears got a run back thanks to a Kiwoom fielding error in the eighth inning. 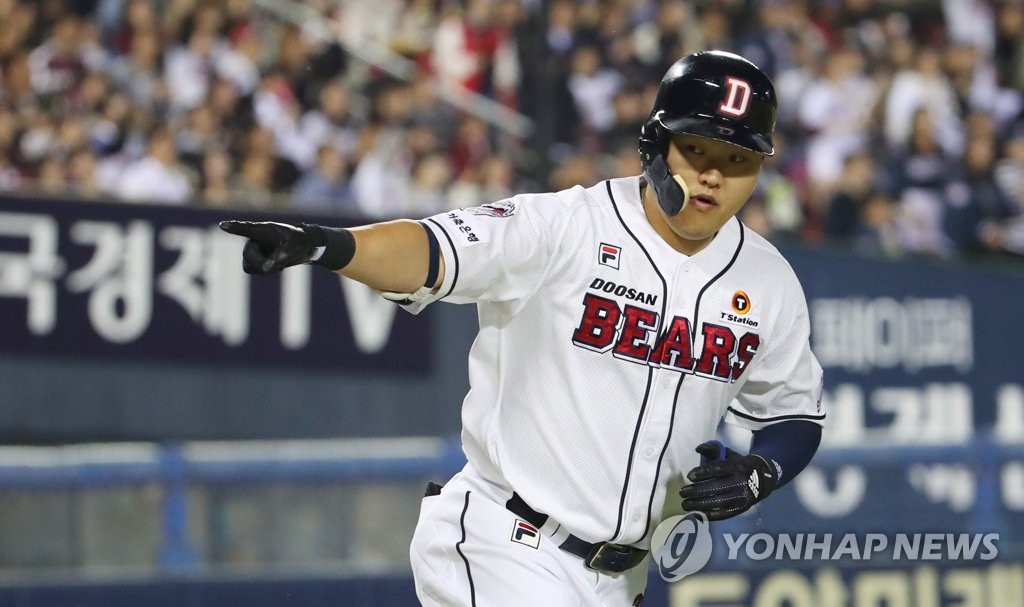 With men at first and second with one out, Jose Miguel Fernandez hit a grounder to second baseman Kim Hye-seong that should have been turned into an inning-ending double play. But Kim had the ball go off his glove and trickle into center field, as Park Kun-woo scored from second base to cut it to 5-3.

But for the second time in the game, Kim Jae-hwan and Oh Jae-il, the No. 4 and No. 5 hitters, struck out to kill the rally with two runners aboard, this time against lefty Lee Young-jun.

The Heroes failed to cash in with men at the corners in the top ninth, and that set the stage for the Bears' improbable comeback in the bottom ninth.

Heo Kyoung-min and Oh Jae-won greeted closer Oh Ju-won with a single and a double, chasing the left-hander from the game before he recorded an out.

Against the new pitcher, Han Hyun-hee, Kim Jae-ho lined a single up the middle to make it 5-4. Then pinch hitter Kim In-tae sent a sacrifice fly to left to knot the score at 5-5. 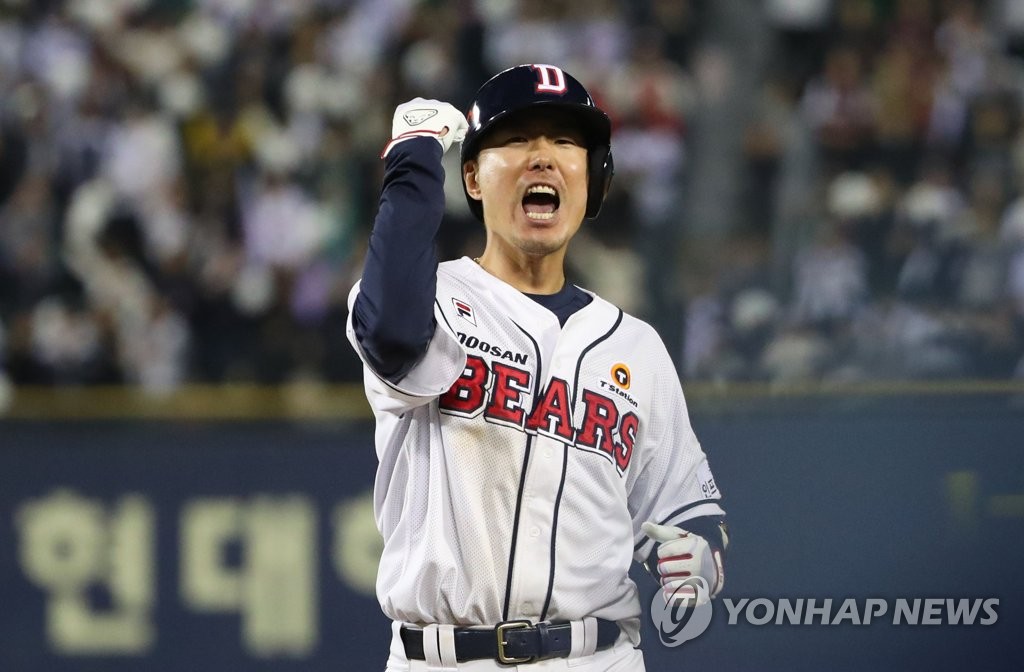 With Park Kun-woo at the plate, Han threw a wild pitch to move the runner at first, Ryu Ji-hyuk, into scoring position. At 2-2 count, Park drove a game-winning single to center field, setting off a wild celebration on the field.

The Heroes rode their stout bullpen through the two previous playoff rounds, but appear to have run into a wall against the Bears. Oh Ju-won, usually the reliable closer, was the losing pitcher in Game 1 and was charged with two earned runs without retiring a batter in Game 2.

Cho Sang-woo, who began the season as the closer and moved to set-up role after returning from mid-summer shoulder injury, has thrown 8 2/3 shutout innings this postseason with 11 strikeouts. But Kiwoom manager Jang Jung-suk said he has no plans to change his closer this deep into the postseason.