SEOUL, Oct. 24 (Yonhap) -- A former top North Korean nuclear envoy said Thursday he hopes to see the United States act "wisely" through the end of the year, apparently referring to the deadline Pyongyang set for Washington to come up with a new proposal in their denuclearization negotiations.

"When I met the chairman of the State Affairs Commission (Kim Jong-un) and reported to him the pending problems arising in external affairs including the issue of the relations between the DPRK and the U.S. a few days ago, he said that the relationship between him and President Trump is special," he said in the statement carried by the Korean Central News Agency in English.

"I sincerely hope that a motive force to overcome all the obstacles between the DPRK and the U.S. and to advance the bilateral relations in the better direction will be provided on the basis of the close relationship," he added.

He also criticized Washington officials for being "hostile" to North Korea and preoccupied with the "Cold War mentality" despite Trump's political judgment and intention.

Still, Kim said there is a possibility of moving forward, but it depends on the actions of the U.S.

"There is a will, there is a way. We want to see how wisely the U.S. will pass the end of the year," he added.

His remarks appear to be aimed at urging Washington to take a more flexible approach in nuclear talks, while signaling Pyongyang's intention to resume talks that remain stalled.

Emphasizing the "special" relationship between Kim and Trump and criticizing Trump's staff, the North seems to be seeking yet another summit with the U.S., as it sees such a top-down approach as having a better chance of producing progress in talks with the U.S., experts said.

"Kim Kye-gwan's statement can be construed as Pyongyang's intention to push for a top-down approach in talks with Washington in an apparent hope that summit talks could have more chances of getting what it wants rather than working-level meetings like the one in Stockholm," said Woo Jung-yeop, a researcher at the Sejong Institute, a private think tank. 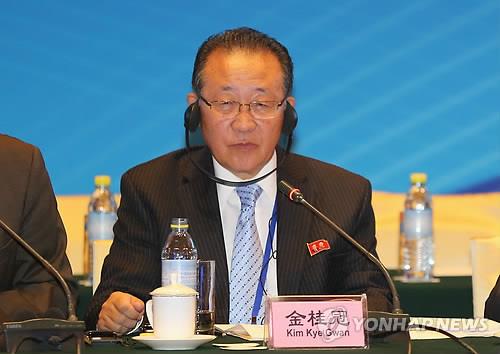 The two countries held the meeting on Oct. 5 in Stockholm for the first time since the collapse of the second summit in February between North Korean leader Kim and Trump over how to match Pyongyang's denuclearization steps and Washington's sanctions relief.

The meeting, however, broke down again as they failed to narrow differences. Declaring its breakdown, the North blamed the U.S. for coming to the negotiation table "empty-handed." Washington claimed it proposed "creative" ideas and had good discussions.

Pyongyang rejected Washington's desire to hold another meeting within a couple of weeks.

In April, North Korean leader Kim said he will wait for the U.S.' "courageous" decision until the end of this year, suggesting he could make a major shift in the country's nuclear policy if Washington doesn't make a marked change in its approach to negotiations.

Earlier this week, Trump touted his engagement with North Korea, raising the prospects for talks.

"There's some very interesting information on North Korea," he told a cabinet meeting Monday. "A lot of things are going on. And that's going to be a major rebuild at a certain point."