SEOUL, Oct. 24 (Yonhap) -- If nothing else, you have to hand it to Song Sung-mun for having thick skin.

The Kiwoom Heroes third baseman entered Game 2 of the Korean Series against the Doosan Bears on Wednesday facing controversy over his expletive-laden trash talk from the previous night. But despite merciless boos raining down from the majority of the sellout crowd of 25,000 at Jamsil Stadium in Seoul, Song tripled in his first at-bat as part of a two-hit night. 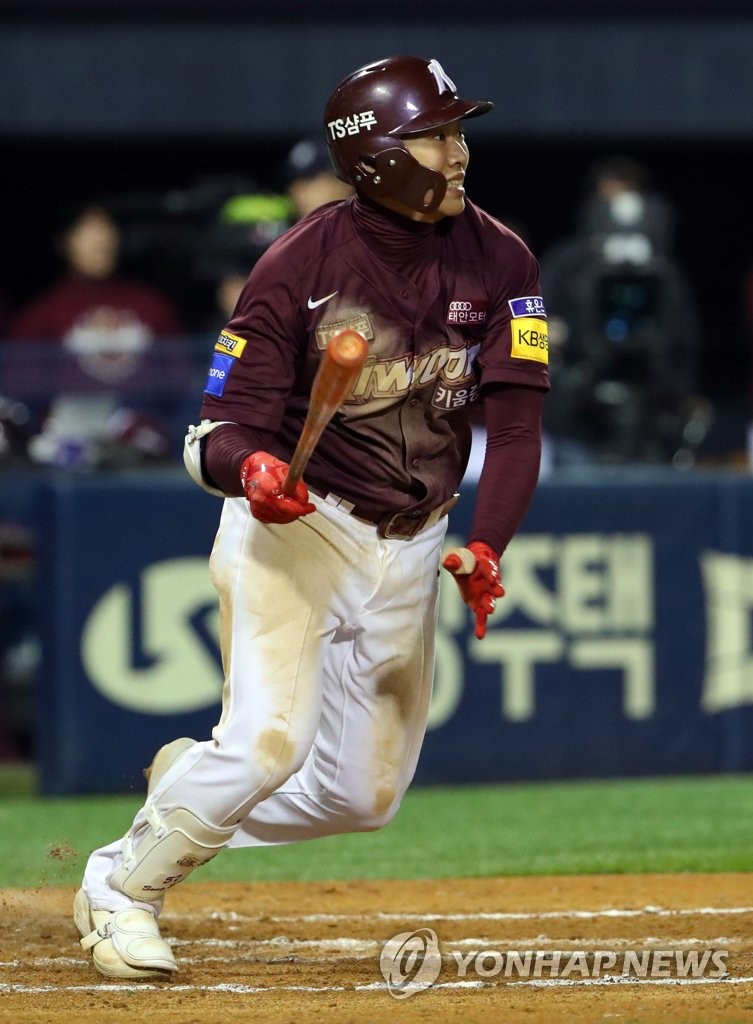 A film crew hired by the Korea Baseball Organization (KBO) was shooting both dugouts for a post-Korean Series documentary during Tuesday's Game 1 and ended up capturing Song spewing invectives at the Bears' players. He was also heard mocking his opponents' past surgery history and wishing injuries on them.

The video, posted online without the KBO's permission and since taken down, quickly went viral and sparked an uproar among fans of the Bears and other clubs.

After getting hammered by angry fans on his social media pages, Song, 23, held an impromptu press scrum in the dugout about an hour before Wednesday's Game 2 and apologized for his action.

Song still found himself in the starting lineup, batting sixth. His manager Jang Jung-suk had already penciled Song in as his starting third baseman when he belatedly learned of the hoopla from the previous night. In his pregame press conference, Jang said he'd take Song out of the lineup if the player looked distracted or disoriented at all in practice. 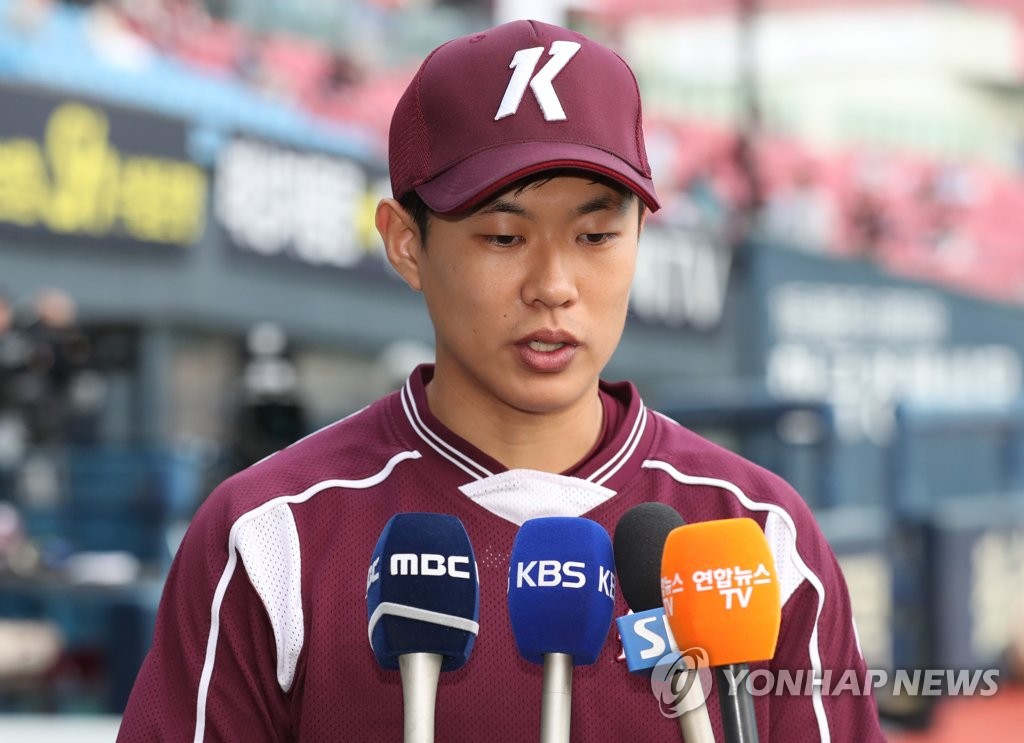 But Song remained the same -- a pesky hitter that pitchers love to have as a teammate but hate to face as an opponent.

When Song stepped into the batter's box for the first time in the top of the second inning, the Bears' supporters let him hear it. KBO fans don't normally jeer opposing hitters -- when their team is pitching, the fans cheer on their pitcher and acknowledge strong defensive plays -- but this situation was hardly normal.

And at a 1-2 count, Song sent a scorcher down the right field line for extra bases. The boos seemed to get louder as he made the turn at second and headed for third. He slid past the bag but kept a foot on for a leadoff triple.

Song got to his feet and pumped his fist to celebrate, and by now, the boo birds were out in full force. Song scored on a sacrifice fly later in the inning.

Song was in the thick of the action in the sixth inning, when the Heroes broke out for three runs to take a 5-2 lead. Song drove in the team's second run of that frame with a seeing-eye single through the hole on the right.

He did have his lowlight in the eighth inning. After a leadoff walk, Song tried to lay down a bunt for a hit. But the ball bounced right in front of catcher Lee Heung-ryun, who fielded it to start a 2-6-3 double play. The cheers from the Bears' section were so loud that if you were only hearing the sound from outside the stadium, you would have thought the home team had scored.

Song was lifted in favor of Kim Ji-soo for defensive purposes at third to begin the eighth inning.

Song's botched bunt attempt killed a potential rally, and the Heroes failed to cash in after putting two men on in the top of the ninth. The Bears then staged an improbable comeback in the bottom ninth, scoring three runs for a 6-5 victory that gave them a 2-0 series lead. 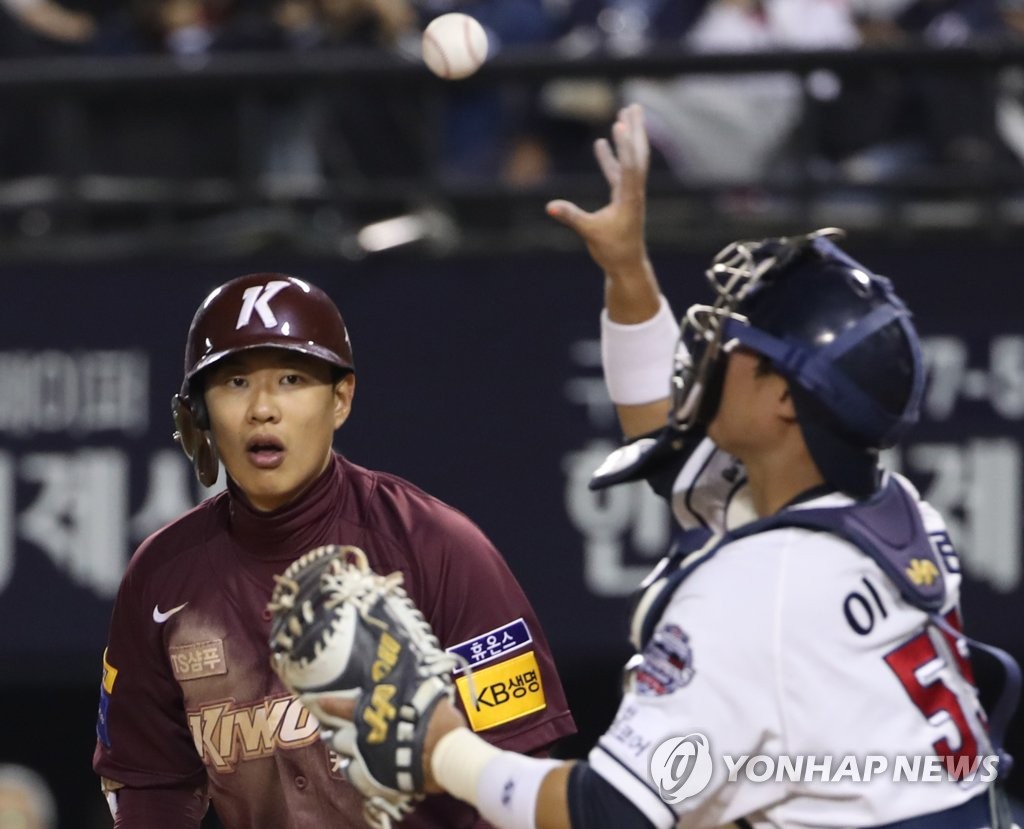 Song is doing his part at the plate. He's 3-for-6 with two RBIs in this series and has been 9-for-17 in the postseason.

The Korean Series now moves to the Heroes' home, Gocheok Sky Dome, in Seoul. Games 3 and 4 are Friday and Saturday, respectively. Game 5, if necessary, will also be at the dome Sunday. The Bears will host the final two games of the best-of-seven set if it goes that far.

Song will have to keep swinging the hot bat if the Heroes want to take the series back to Jamsil. He will probably hear boos again, but Song proved Wednesday night he can have them go in one ear and out the other.

Controversy or not, Song Sung-mun remains the same in Korean Series

Controversy or not, Song Sung-mun remains the same in Korean Series