In October, Renault Samsung Motors Corp. started the Twizy's production at its sole plant in Busan, and the first batch of 142 Twizys will be shipped to Europe this week, the company said in a statement.

"The company will focus on expanding sales (of the Twizy) in Europe and then look to Asian markets in its diversification strategy," the statement said.

The ultra-compact car had been produced at Renault's Valladolid plant in Spain and imported to the South Korean market for local sales. A total of 3,400 Twizys have been sold in Korea since its launch in 2016, it said.

The two-seat Twizy is priced at 13.3 million won to 14.3 million won (US$11,400-$12,200) in the domestic market. Customers can get a Twizy at lower prices with government subsidies worth an average of 5 million won.

It carries a driver airbag and can travel up to 80 kilometers on a single charge. It takes three and a half hours to fully charge the car from a standard 220-volt outlet, the statement said.

Renault Samsung, which is 80 percent owned by Renault, has one plant with an output capacity of 270,000 units in the port city of Busan, 450 kilometers south of Seoul. 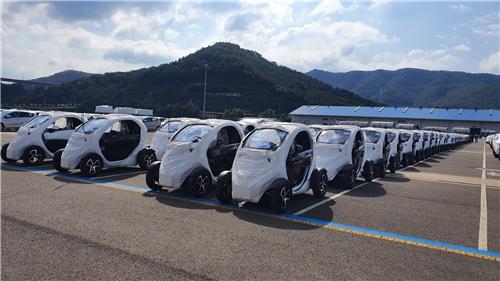